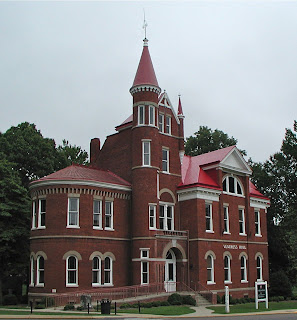 Memphis architect C. G. Rosenplanter designed this Romanesque Revival structure (similar to the Oxford City Hall) with its 4-story turret.  It was built to house the library, and served that purpose from 1889 until 1911.  The Oxford Time Machine provides a "then" and "now" photo comparison, illustrating a young campus with nothing much more than a road from Ventress to the Lyceum.

In 1985, the building was named Ventress Hall in honor of James Alexander Ventress, the first trustee of the University.  He is referred to as "the Father of Ole Miss" for his role in securing the legislative action to create the university.

Renovation of the building was completed in 1997 by Howorth and Associates.  Ventress is said to have been sketched, painted, and photographed more than any other building on campus.
Posted by Suzassippi at 9:31 AM