I've been posting a lot lately about travel, and historical buildings, and architecture.  Those are a lot of fun for me and a welcome break from routine.  After reading the recent publications on social justice over at the Activist Reader, I thought it was time to spend some time revisiting an issue from my last trip to South Africa.  Whilst there, I wrote an essay about the Toilet Wars for another publication.  I decided to follow up and see what was happening.  This is the background to the Wars, and tomorrow, I'll talk about what I learned about it first hand. 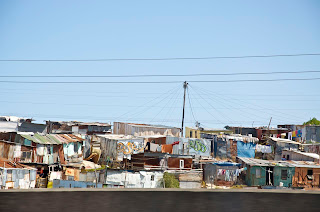 There truthfully is not any way to describe the South African townships that really enables one to visualize it if you have not seen it for yourself.  Even pictures don't fully allow comprehension of the vastness of the informal "shanties" or "shacks" that are home to those who are living in poverty.  Most of these homes have inadequate, or no, hygienic access to water, toilets, or sanitation facilities.  These conditions were created under the apartheid government, but the Constitution of South Africa written for the new democracy, describes the right to housing, water, electricity, etc.  The African National Congress was elected on those promises.  Fully 17 years after the ANC took control of the government, there are still hundreds of thousands of South Africans without access to basic needs. 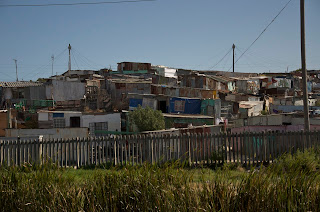 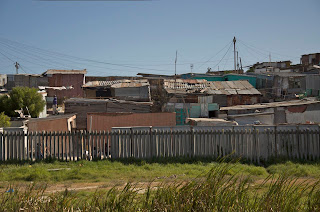 If you enlarge this picture by clicking on it, you will notice a series of gray concrete buildings next to the fence.  These are some of the toilets that have been installed in townships.  Many townships received "block toilets" right after the democratic government took control, but large public toilets were dangerous and lacked any sense of dignity.  The response has been to install single toilets, most still in clustered areas.  People continue to have to walk a distance to access a toilet.  It's dangerous.  When we were in Gugulethu in 2007, visiting a community development program, a couple of us needed a restroom.  One of the women who worked there said, "I'll take you and wait for you."  We walked about a half a block to a toilet inside a concrete shed, similar to the ones above, and squatted over a toilet with no seat, no cover, in a building with no roof, while our host waited outside.  It's dangerous to go to the toilet by yourself there.  Rape and murder occur far too often to people simply tending to this daily need we don't talk out loud about. 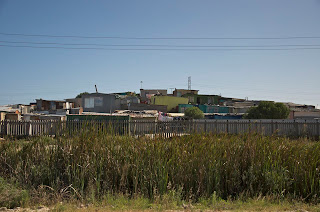 According to the South African Department of Water Affairs and Forestry, over 1.5 million cases of diarrhea are reported for children under the age of 5.  As many as 100 children may die every day from diarrhea; this number could be reduced by 40% with adequate sanitation facilities.  Human waste is the source of most pathogens and germs contributing to diarrheal diseases.

The ANC and the Democratic Alliance (DA) were allies in fighting apartheid.  In 1994, the ANC in taking power promised to correct the situation of the millions of South Africans without sanitation.  The DA, who hold power in Cape Town municipal government, started putting plumbing and toilets next to each shack several years ago.  The local residents were expected to put enclosures around the toilet--the concrete sheds you see in the pictures above.  For whatever reason, about 7% of those residents in that township either did not, or could not afford to, enclose the toilets.  There were "open air" toilets in use in areas near Cape Town, as well as in other parts of South Africa.  This most private and personal bodily function of any of us, and people are expected to use a toilet with no concealment for this need.

With the coming of the World Cup in 2010, The DA erected tin enclosures around the remaining open air toilets in the township near the city--no one wanted pictures of that making  the international news.  The ANC Youth League tore them down, saying they were insufficient and an insult to human dignity.  In response, the DA removed the toilets altogether.  Thus, began "The Toilet Wars."

When one considers the plight of billions of humans around the world, it makes almost all of our day-to-day complaints look very small and insignificant.

Horrible! The things we take for granted. While living in France back in the 50s, there were still some public toilets (like phone booths) on corners of busy streets but nothing like you describe.