The Master Bath is Complete--after 4 years 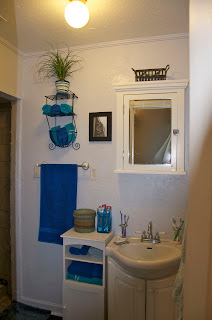 We started the remodel in 2007 when we had to tear out the shower in the master bathroom, due to it being incorrectly built in the first place. (See postscript at bottom).  That was the most pressing, so once finished, it was always "someday" on the rest of it.  We finally began the someday last August, slightly over a year ago.  Today, it is finished. 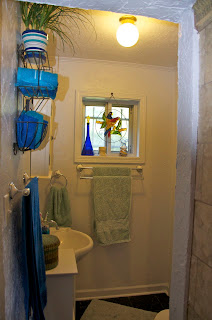 Because the linen closet was sacrificed for the shower size, space is a premium and I have to get creative to store towels, personal items, and other supplies.  This bathroom has been an eyesore since we moved in, and I was ready for something that was a little more pleasing than the poorly applied, unattractive brown wallpaper that came with the house, the over-sized sink with its ugly cabinet base, and the mismatched paint on the trim. 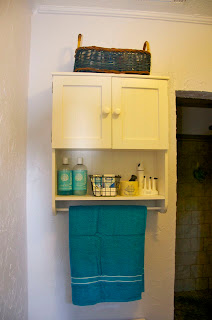 It's not obvious in the photos, but the wall color is Icy Waterfall--very pale with the lightest tint of blue.  When I was home earlier in the month, I was admiring these aqua and royal blue towels Mom had just bought.  Her bathroom is rose, pink, and cream, so I was not sure why she had selected them.  She asked, "Do you want them?"  You know my answer, don't you? 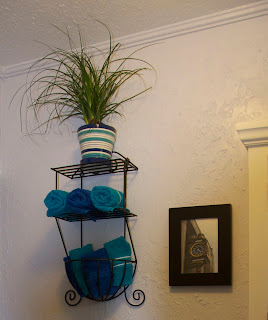 The clock photograph is from our trip to London several years ago.  We took clock photos all over London, but I especially liked this one on an Art Deco building. 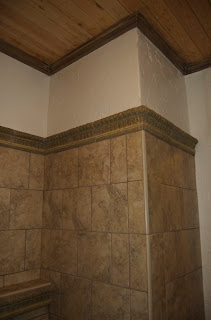 The shower that was finished in 07--still going strong with no leaks.  We used Kerdi. :)  If you have read earlier posts, you know that Will built the shower with no water barrier between the tile and the walls, and with no shower pan liner.  He just poured a mortar floor on top of the wood flooring, and then tiled on it.  (I might add that it was a pathetic tile job at that, unevenly spaced, and I could show pictures to prove it.  In fact, one of these days, I might do the before and after post).  However, as a result of that, the flooring, sub-flooring, and joists rotted and the shower (along with all of those previously mentioned items) had to be replaced. 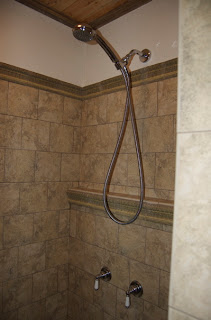 We thought about going with a blue, or blue green tile back then, and opted for a more neutral shade...and then I went with blue and aqua in the rest of the bath.  Eventually, I will figure out how to meld the two spaces with some color changes in each, but for now, I am just happy that one bathroom is finally finished, and I can go in there without wanting to find Will and give him a good "talking to."  I rest my case--yet again--that I inherited more from my dad--the master tile man and master carpenter--than just my good looks. :)  Did I mention that I tiled this shower?
Posted by Suzassippi at 6:15 PM

Thanks! Now, to finish the other one!