From Charles McClung McGhee Victorian Mansion to the Masonic Temple: Architects Joseph F. Baumann and A. B. Baumann

Architect Joseph F. Baumann designed the Victorian mansion for industrialist and financier Charles McClung McGhee in Knoxville in 1872.  McGhee was the director of the East Tennessee, Virginia and Georgia Railway and responsible for much of Tennesee's railway construction.  His many contributions to Knoxville include the Lawson McGhee Library in 1885, which ultimately became the Knox County Public Library system.  McGhee lived in the house until his death in 1907.
The next phase of the home's history came in 1915 when the Masons bought the house for $25,000 and hired architect A. B. Baumann to remodel and alter it to a "monumental classical structure" more fitting with their purpose.  It was indeed a radical departure from McGhee's mansion, and only some of the interior original details remain.  Constructed at the same time was Kendrick Place next door, then known as Masonic Court due to its proximity. 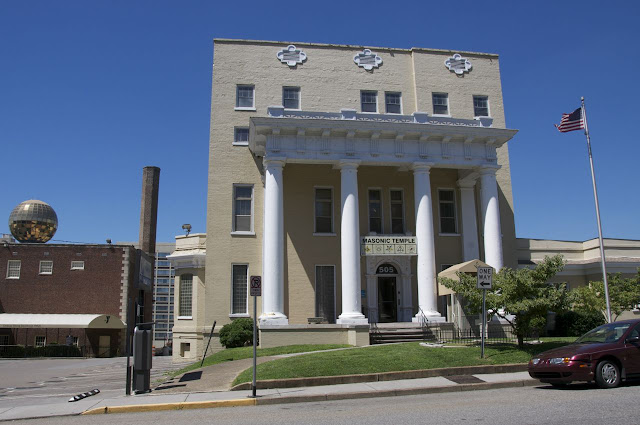 I confess to liking the 1915 remodeling much more than the original, which is just too ornamental for my tastes.  However, the subsequent remodel destroyed most of the things that made the 1915 version so striking--removal of the beautiful pent roof and the enclosure of the portico.  The pent roof broke up the large expanse of the facade above the flat roof of the portico and helped define the revision.  Now, it just looks out of proportion.  At least one of the octagonal features from the original design was retained, and is visible to the left rear of the house. 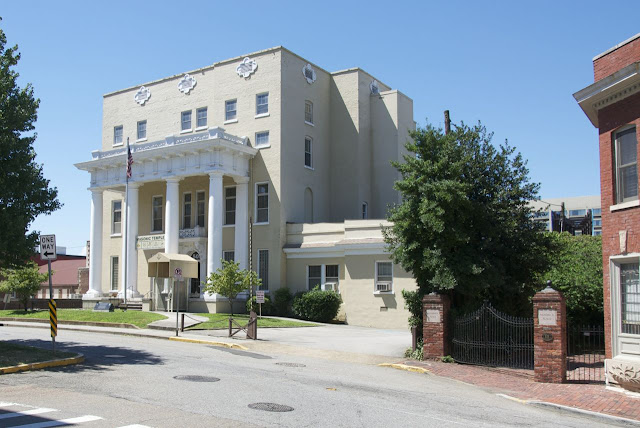 Kendrick Place next door was constructed at the same time as the remodel of McGhee's Victorian home, and was originally known as Masonic Court, due to the location.  Kendrick Place was renovated by downtown Knoxville revivalist Kristopher Kendrick, credited with taking the visionary lead to revitalize the urban core of the city.

Inside of Knoxville took a look inside in 2011, and while you might enjoy his take on the revision, he also provides some interior photographs of both the original interior details, and a few of the "mixed with 1970s decor: cheap paneling and drop-tile ceilings" that apparently came about more recently.  I suspect that most renovations that remove significant architectural features do so on the basis of need for more space (e.g., enclose a porch and portico to create additional interior rooms) and ease of upkeep (remove a pent roof because it reduces the upkeep on an upper story which is probably hard to access).  That doesn't remove the fact that the building is not very attractive in the current evolution, but it might help explain it.  In its next life, it will probably be renovated into urban loft-style living for Knoxville residents who can pay anywhere from $280,000-$300,000 or more to live in this currently highly desirable neighborhood, which is in my opinion, better than tearing it down and building a new structure.

Sources: KnoxHeritage.org Downtown Walking Tour; Just exactly what is inside that Masonic Temple?, Inside of Knoxville: Your Urban Connection; Elena Irish Zimmerman, 1998, Knoxville, Tennessee, Charleston, SC: Arcadia Publishing)
Posted by Suzassippi at 11:20 AM

To say that it is not very attractive in its current state is an understatement. UGH! I tend to like the original home, although it is a little ornamental and busy in its design. At least they didn't tear the structure down, but I have to think that the re-do could have been a little softer. And, those drop down tiles keep appearing everywhere.

I thought you would note the drop-down ceiling tiles. :) Perhaps I would like the original better if I could see it, but with all the trees and vines, all I can really note is the roof-line. Busy is a good word for it.