DeWitt is still using its 1939 post office.  The federal government appropriated $75,000 to construct the post office ("Dewitt Post Office, Dewitt, Arkansas County" retrieved from Arkansas Historic Preservation Program at arkansaspreservation.com).  It is, of course, remarkably similar to other post offices built during that time.  This design is seen throughout Louisiana, Mississippi, and Arkansas.

Why should we care what post offices look like?  Aren't they simply utilitarian structures meant to facilitate the exchange of mail?  Why can't they all be boxes made of corrugated metal?  As usual, it's not that simple. (Donnelly, L. 2001, Architecture around us, Western Pennsylvania History, p. 8) 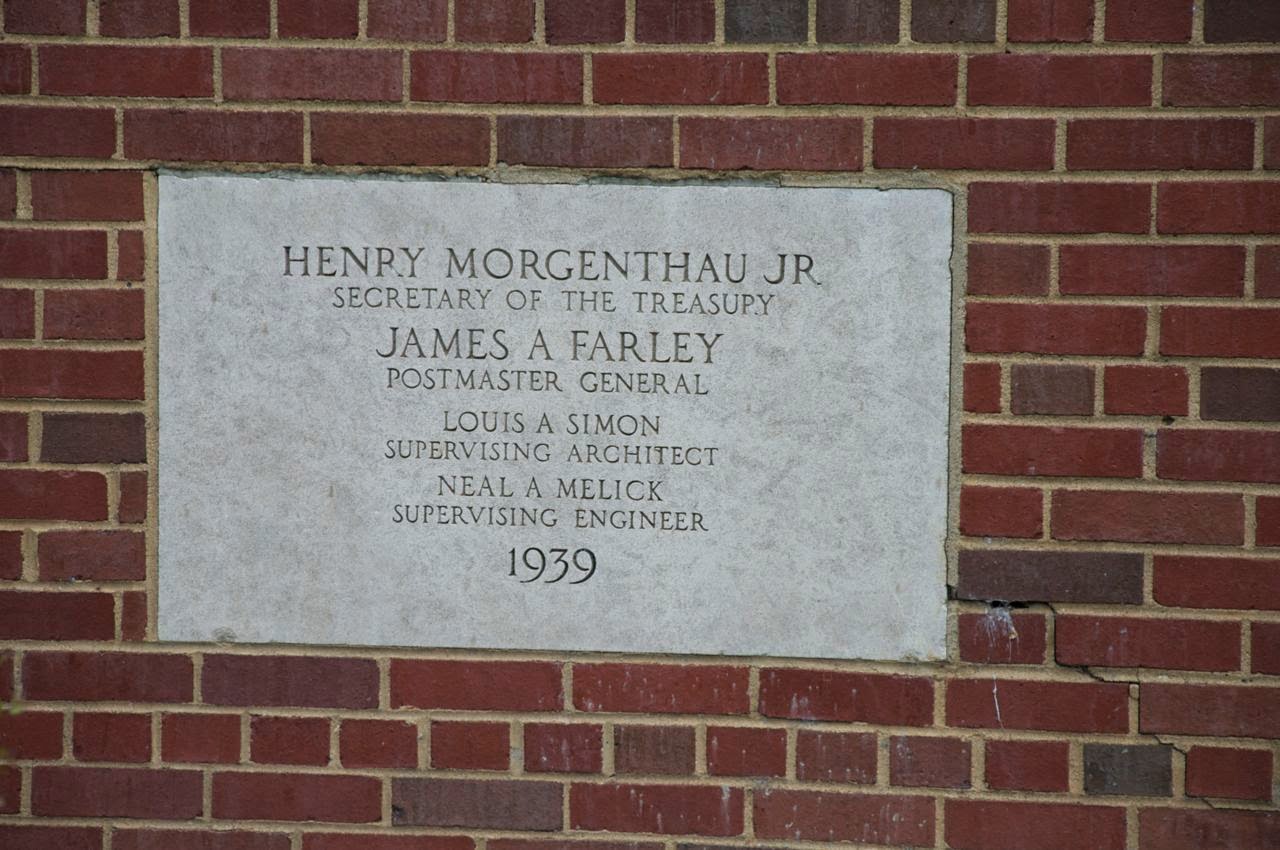 Louis A. Simon, whose tenure [as supervising architect] covered the design of some 40,000 new post offices during the Depression, preferred an art deco version of the classical; one wag called it "Starved Classicism." (Donnelly)


Mean, thin, ill-proportioned, non-style, loosely based on Classicism but displaying little feeling for rules, proportions, details, and finesse, and lacking all verve and elan. It is not to be confused with stripped Classicism, which is usually robust, confident, powerful, and often Sublime. 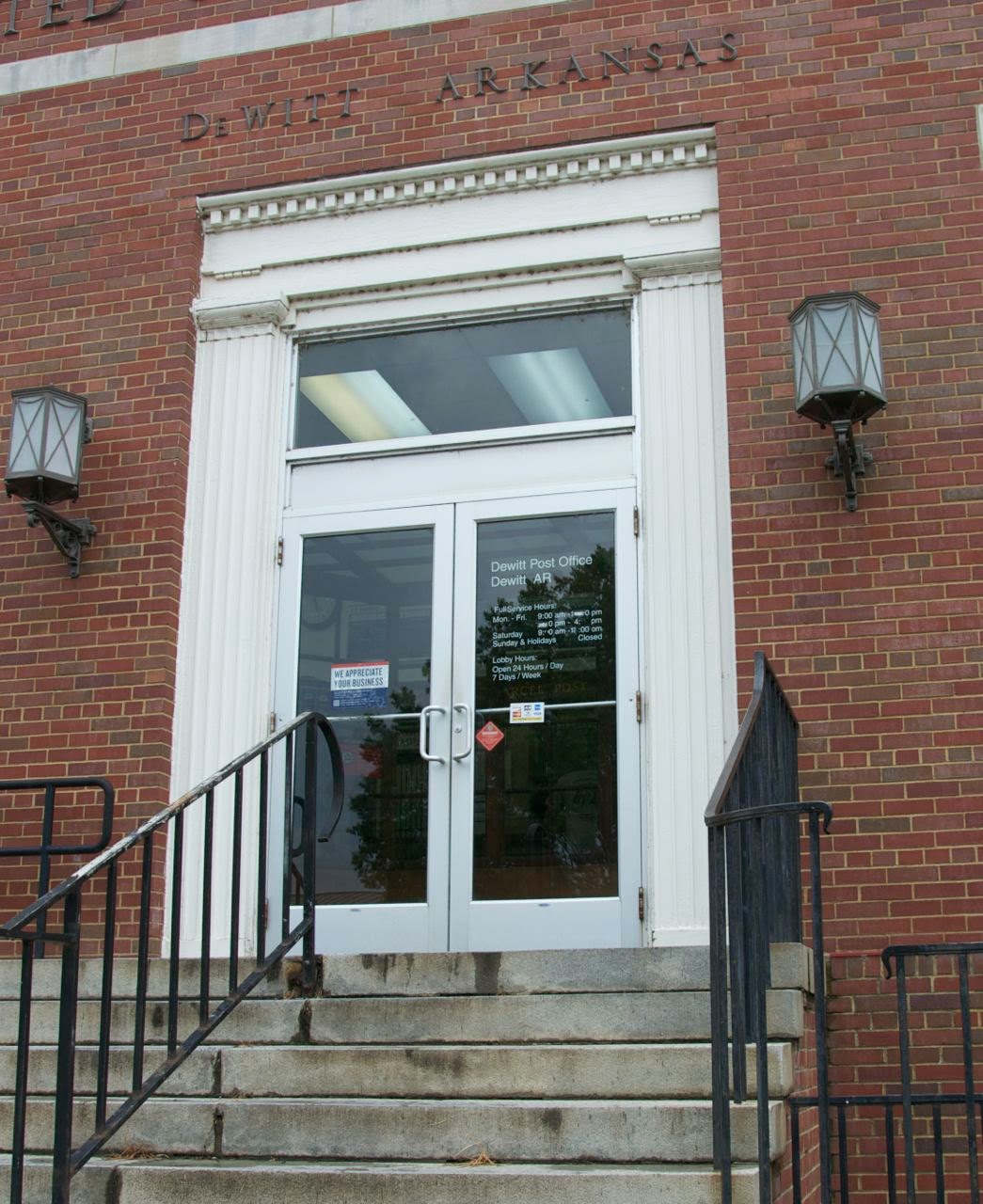 The building is similar to many National Register of Historic Places post offices identified as starved Classicism, but the NRHP form defines it as "a restrained interpretation of the Colonial Revival style of architecture."

The post office contains a mural by William Traher, completed in 1941.  Traher was commissioned to execute the mural for $750 and went to DeWitt for three weeks to observe and study the community (Arkansas Historic Preservation Program).  As I was photographing the mural, the postmaster came out of her office on her way to lock up the windows for lunch.  She spoke, and asked about my interest in the mural.  I said I was working on research and she asked "about slavery?"  Well, no, about New Deal era buildings and the murals that are in many of the post offices built with those funds.  I gave her my business card, and the one from the Living New Deal project, explained about the work and how to find it using the search feature for the Living New Deal website. 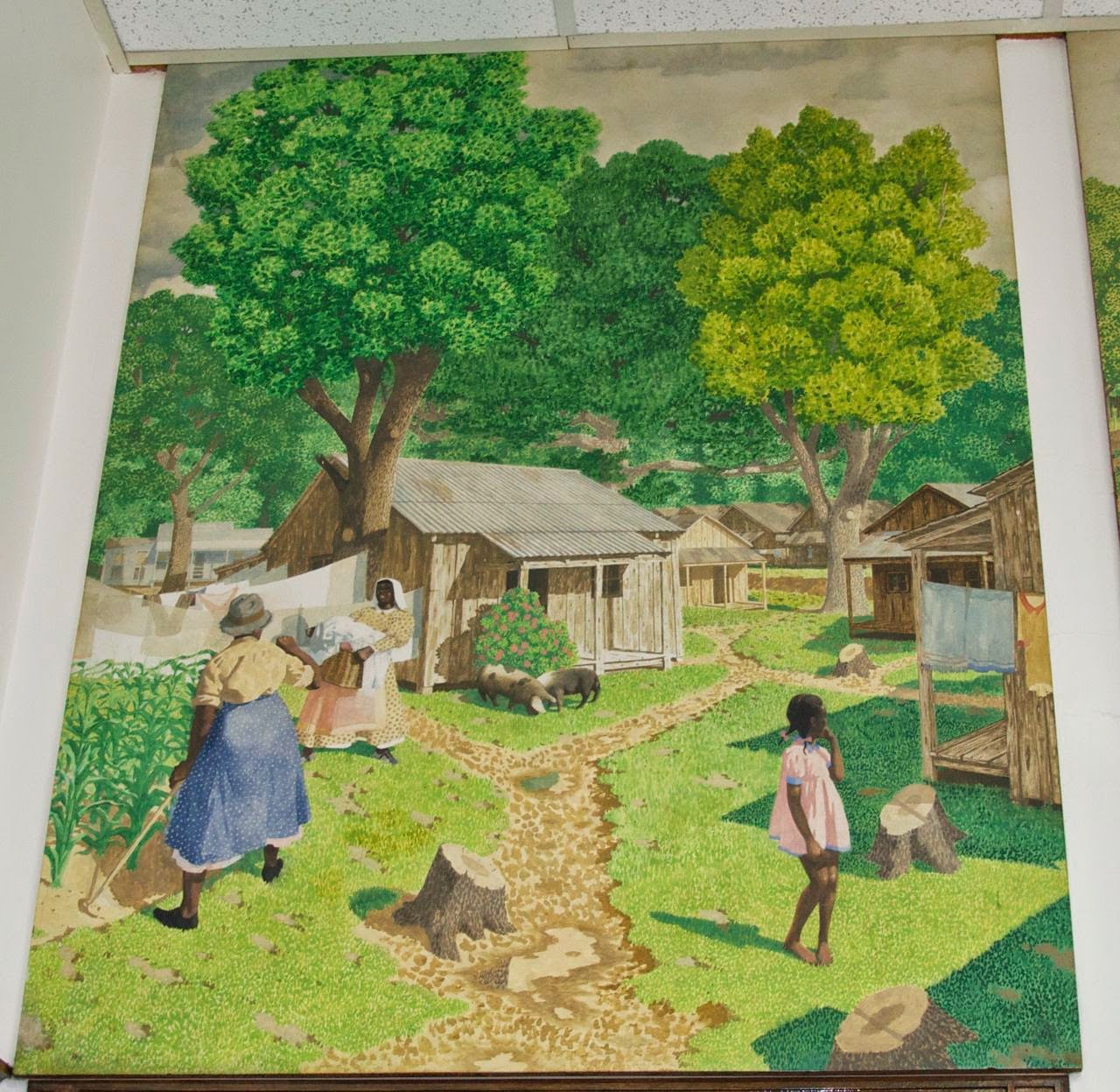 She added, "A lot of people criticize this for being here."  I said I was sure they did, because some of them were quite controversial now.  It raises a troubling question because on the one hand, it is historic art work that is very significant in its context, and on the other, it is painful and difficult for some people to view.  It is certainly not unusual in the south to see murals that contain images of slavery, or reflect the Jim Crow era, as this mural does, and that are criticized as insensitive.  Traher titled it "Portrait of Contemporary DeWitt," which in 1941, it no doubt was.

Traher's remarks in his letter to the selection committee was profoundly revealing of his stereotypical views, his prejudice, and lack of awareness and understanding of the reasons for the very real differences in living conditions.  He allegedly just sort of wandered around, sketching out people he saw, making notes of the quiet and calm community, with the plan to put the mural together back in his studio.  Did people in DeWitt really let their hogs run loose?  I would think not--wouldn't you be concerned about them wandering off, getting stolen, or eating your crops or rooting around in your laundry?  It seems to me that might be some artistic license. 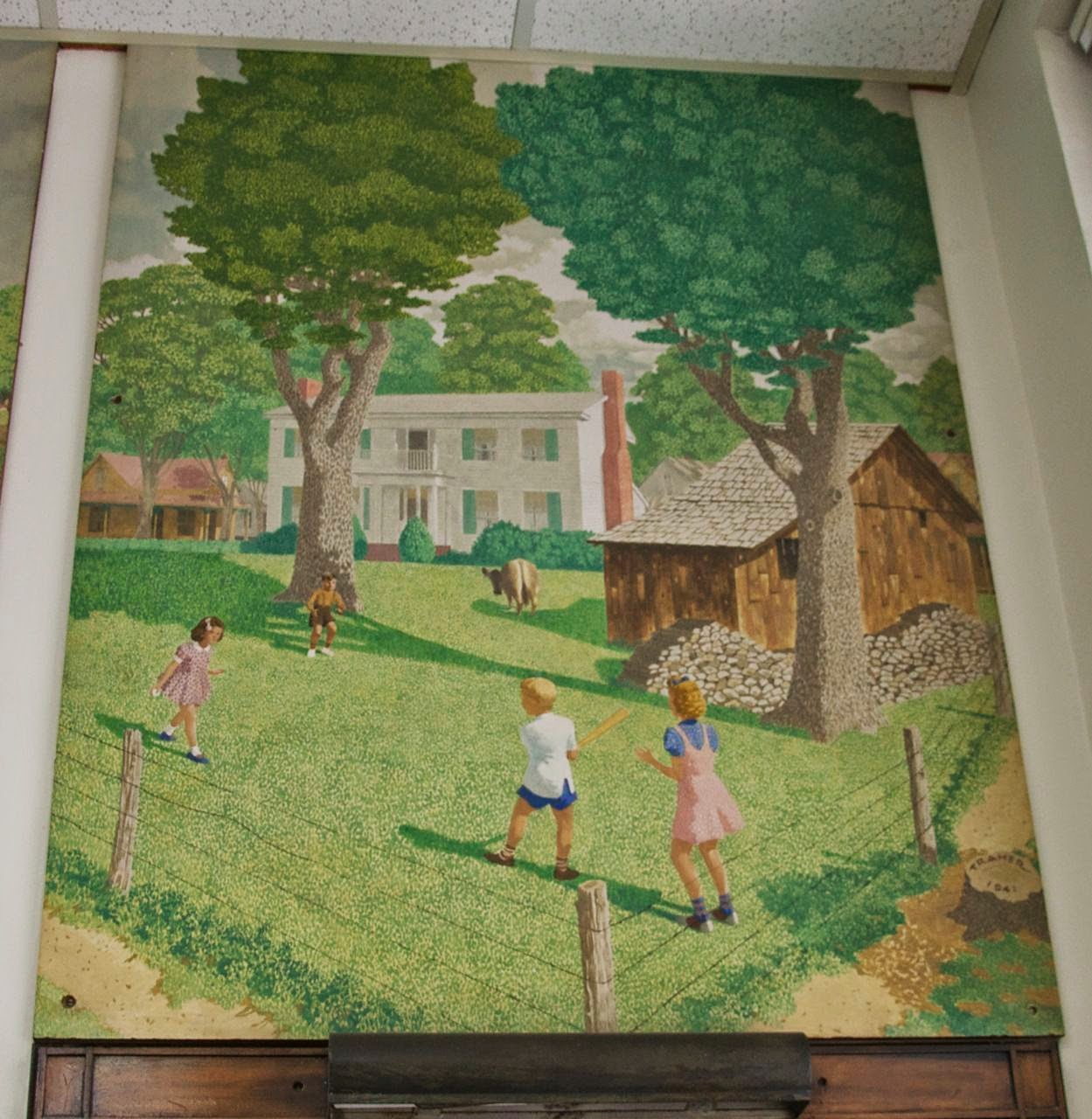 I find it equally unlikely that someone living in "town's handsomest and most historic  house" [the Halliburton House] would have the cows in the front yard with the kids, but maybe folks in DeWitt just liked their farm animals up close and personal.

I think what art such as this can do is to be used for teaching and understanding of history, of racism and the vestiges of inequality that continue to exist and damage us now, and provide opportunities for understanding.  But is it right to do that, particularly knowing that the "learning opportunity" (if it is even attempted) comes at a cost to someone else's emotional well-being, or sense of dignity and personhood?  It is a conversation that will not be easy to hear.
Posted by Suzassippi at 7:56 PM

You've raised a good point. Traher painted with artistic license through eyes that really didn't see or a mind that understood. Do you know where he was from?

But I do like the term Starved Classicism and the buildings that it describes.

He was born in Wyoming in 1908, and at some point, the family moved to Denver. He studied in New York City and was admitted to Yale's School of Fine Arts. But then, our universities were and still are testaments to institutional racism, so I guess I shouldn't be surprised. When I first went to college, I was exposed to so many ideas (that's what a good liberal arts college should do) and it changed my life, along with reading. Still, I guess the 60s was experiencing things never dreamt in the 40s.

Very similar. I did a post on Preservation in Mississippi on the Houston Post Office. And I like your new photo with you and the boy!