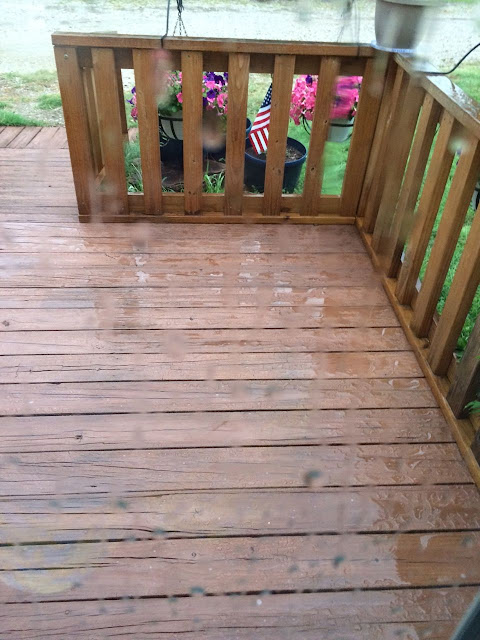 I woke to the sound of rain on the tin roof outside my bedroom door--nothing brings back pleasant memories like that sound.  I immediately was grateful that I had pushed myself to finish staining and sealing the deck yesterday.  I peered through the door, and yup, the newly completed work was doing its job. 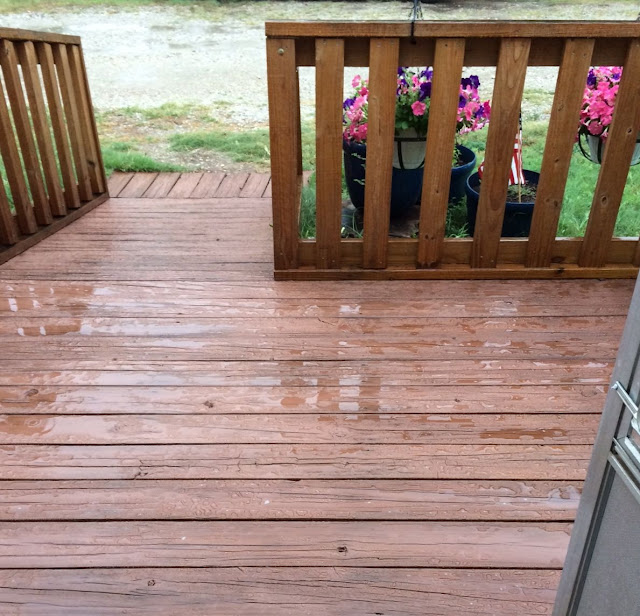 I had been tempted to wait until this morning, and now glad that I did not as otherwise, this chore could not have been completed before I return to Mississippi.  Instead, it was a joy to look out and see the water beading rather than saturating the wood--which had taken a beating during the winter ice and the need to salt the deck to prevent falls. 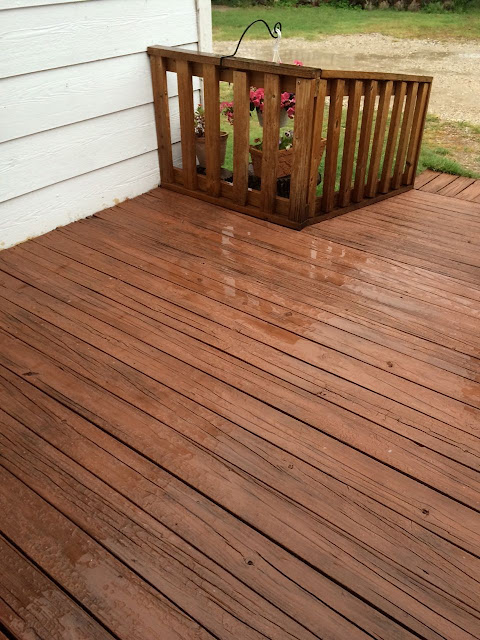 I do have to say that by the time I had finished this job yesterday, I was not just tired, I was in some fairly significant pain.  It took about 2 and 1/2 hours.  I can't get on my knees due to the prosthetic in the left knee.  I am not supposed to bend from the waist due to the hip prosthetic, at least, not for extended periods, and believe me, when I do it, I know.  Long before the deck was done (and I was counting the planks I had left after each strip!) I was in some pain.  I tried sitting on a stool, but that still meant bending forward and down.  I tried sitting on the deck, which was easier, but involved twisting and turning, which brought its own share of problems.  Mainly, I alternated, with standing and stopping to stretch every couple of planks.

After cleaning up my tools, I managed to take some ibuprofen and eat a few bites of potatoes and fresh garden squash, then sat on the opposite--still not stained!--deck and drink a glass of iced tea.  I looked out at the green of the yard and the pasture, the green trees, feeling thankful for all the recent rain.  I had taken Mom over to the bank in Newcastle (where they have had their account since we lived there when I was a child) and we marveled at how the two Graham lakes are full--back to capacity for the first time in years.

On my list this morning was another outside paint job, an outside plumbing repair, and more mowing in Rio's corral and the yard.  Those tasks will not likely be completed now, though I may have to just pull on those rubber boots and dad's flannel barn coat with the hoodie and tackle that plumbing job anyway.  Some things just can't wait.

You are a lady of many talents!

I learned it as a wee lass, from my grandmother and father. Sometimes when I make a repair at home, Rand says, "Your grandma would be proud." She kept her house together with baling wire and paint. :)

Well, my deck needs the same treatment. This reminded me of why I'm procrastinating about doing it. Last time I did I remember counting boards and thinking the deck was growing on me. At least you had the rain to reward you for the pain :)

The west deck is twice as large--perhaps more, so I am thinking either sprayer or roller on a stick for that one. Rand keeps reminding me how much we have to do once I get home--more of the same!