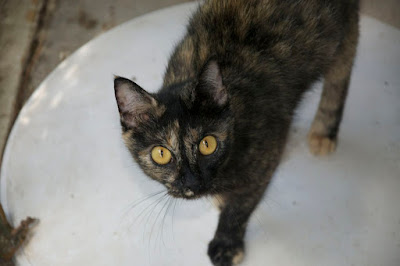 Mama Callie IV was not at sure she was ready for the babies to have their first photo shoot.  You want to do what? Up until she became a mother, she was not at all overly friendly, and rarely wanted human contact.  She has now turned into a petting addict, and is always coming up wanting to be petted.  It most likely is hormonal and will go away, but one can never tell.  She is also very protective of the babies although she is now content to allow me to pet them or pick them up.

Mama Callie is most likely what is called a "tortie" (tortoiseshell) which is a brindle coat with patches of red, brown or black, chocolate, cream or cinnamon.  They are allegedly "sassy" with some Tortitude.  The true calico generally has lots of white. 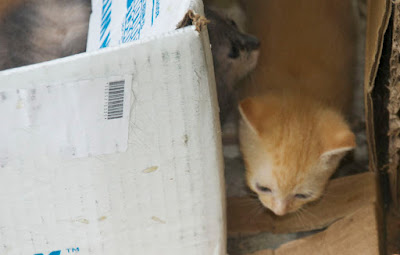 They are quite excitedly--though cautiously--exploring their new surroundings and happy to be able to navigate outside the box that sheltered them at night or when Mama is eating.  They can quickly scamper under the flaps of the box to hide from me (the gray one is especially adept at it as he or she is the shy one). 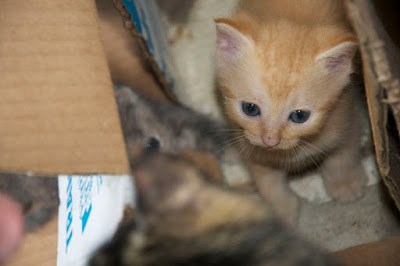 Yellow tabby is becoming more adventurous and now makes no fuss about being petted or picked up, and will wander out onto the porch a couple of feet. 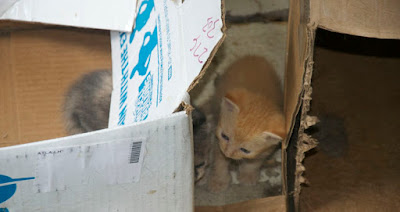 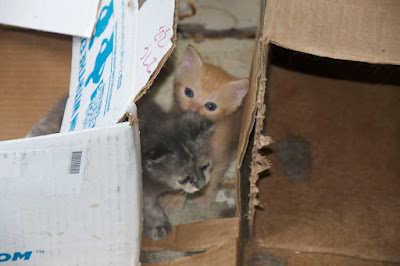 Little gray is not at all certain of what the world outside the boxes holds, and not at all sure if he or she is interested in finding out.  While Gray is the largest of the litter, size is no indicator of the personality in this case. 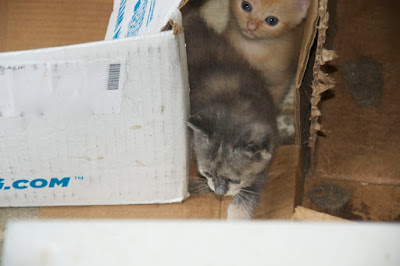 Research also turned up that Gray is likely a Dilute--a pale or lighter version of the original color pattern, used to describe calicos and torties. In kind of an unusual twist to the history of the calicos torties on this hill, the mid-sized cat is the most adventurous, interested in everything (must be the Tortitude), and still has a bit of an aversion to being held--although she will also eye everything from that advantage point and check it out. 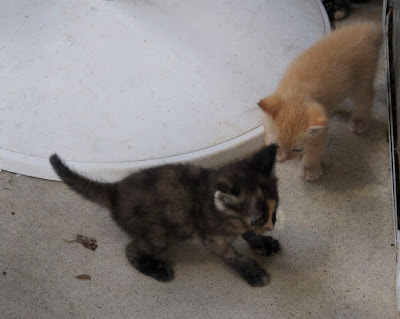 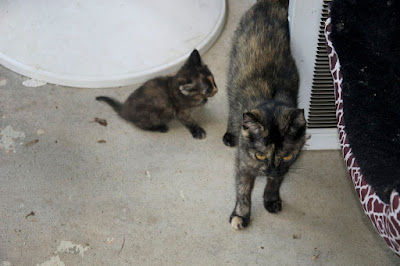 But, enough is enough, and Mama put her foot down--shoot is over, time for mid-morning snack for the kits.
Posted by Suzassippi at 11:33 AM

Oh what fun to have kittens! And, I do love the tortoises. Baby Girl endeared them to me! Did your know that a tortoise is always female and is a cross between a black cat and a calico? My daughter found that out when she rescued BG. More pictures, please of these babies!?!

At the hotel last night I saw a small kitty on the other side of the iron railing-type fence while walking Bentley. It looked very hungry and was limping; I felt so bad for it and hoped that it found its way to one of the restaurant dumpsters and stayed out of the freeway.

When the first two showed up in 2010, I called them brindles, because of their color, but later, someone told me they were calicos--little did I know! I really love the "tortitude"!! Torties, calicos, and torbies are all generally female, and if there is a male, which is very rare, he is sterile because it is a genetic anomaly as I discovered earlier today. I will have to investigate further as soon as I have a chance...maybe in December? LOL

I just constructed them a new "house" of cardboard.

I love the tortitude, too! Do you think the dark baby might be a tortie or is it a grey tabby?

I think it is going to be a tortie, too. She has the markings similar to her mama.

They were so funny yesterday, playing together and exploring! Nothing better than watching that. I think the gray one is going to end up being a gray and yellow tabby, Beth. She or he is starting to show the presence of stripes rather than the mottle. Dark baby is still very brindle colored, and has the split color on her face like Mama.