I am in Jackson for the NASW board meeting today and decided to come down yesterday afternoon and spend the night.  I am getting to be such a sissy about getting up early to drive for 2 1/2 hours in the early morning to make a meeting, even one that thoughtfully starts at only 10 a.m.  I had a bit of research to finish in Jackson on the New Deal work, so I arrived late afternoon, and worked on the paper part of research until time for the 5 pm traffic to subside, plus, some of that hot afternoon heat to cool a bit.

At 7, I headed toward downtown, and yes, thoughtfully, the streets were pretty much deserted.  I could hear live music booming from somewhere up the block, though I could not see it.  It reminded me, though, that I love the city and miss the things a city provides.  Yes, I love my little Taylor hillside, and yes, there is live music in Oxford, but something about being in The City makes it seem so much more funky and urban...probably because it is urban! 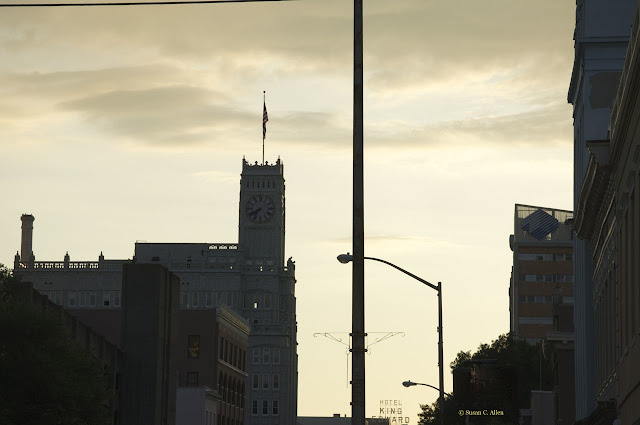 I was on the final site to photograph for the piece I am working on, and stepped to the crosswalk to head back to my car...the only car parked on the entire block.  Apparently, after 5, downtown Jackson pretty much goes home.  While waiting for the light to change in the crosswalk, I admired the silhouetted clock tower against the fading yellow sky.  I have always liked the image produced by anything against the late evening sun, but windmills, water towers, and clock towers or bell towers are in the favorite zone. 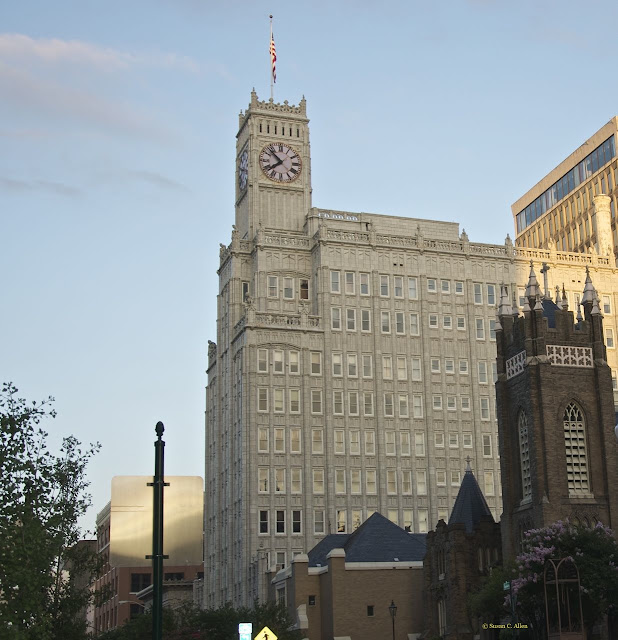 And yet, at the end of that street as the fading light streamed back through the edges of buildings, the effect is like a trick of the mind.  That clock tower that kept such a lonely vigil from my first perspective, is surrounded by the unabashed adoration of the waning sun in the last few minutes of day. 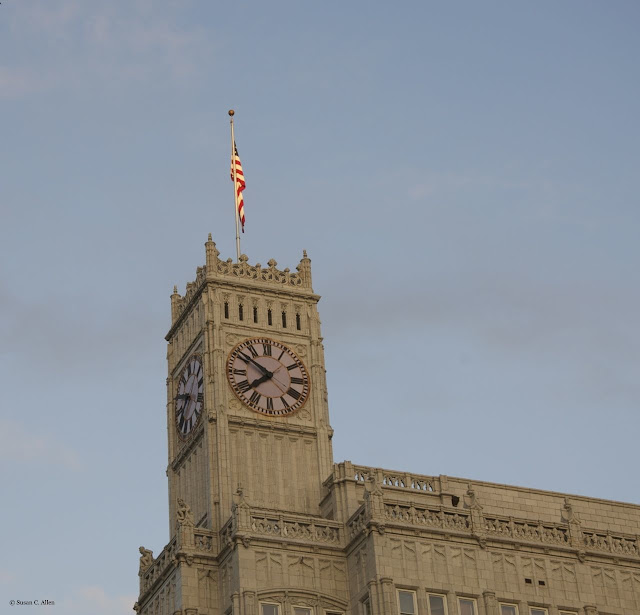 Bold and powerful strength standing watch over the emptying downtown, assuring us of continuance on the morrow... 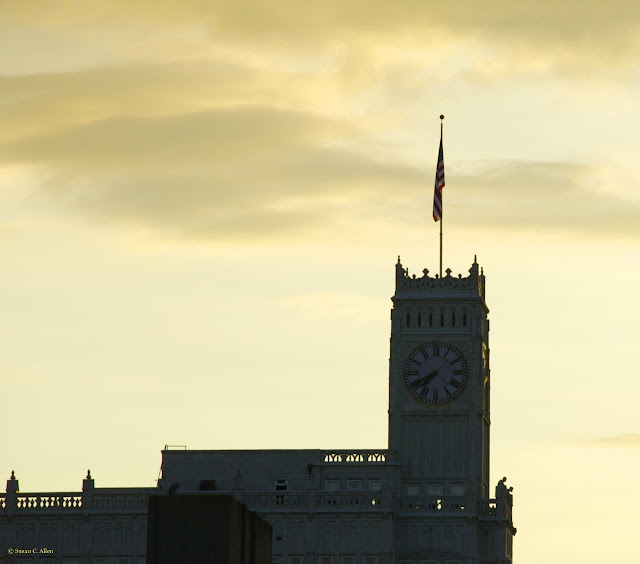 ...but, I still prefer his goodnight face.
Posted by Suzassippi at 8:02 AM

Interesting to see the perspective of night and day at the same time. There's a lot of history in that building...maybe an upcoming post(hint hint)?

I will have to look it up, that's for sure. It was one of those "surprises" on my agenda for the evening!

If I remember correctly the architect for Lamar Life building also designed Eudora Welty's parents home. Her father worked for Lamar Life and contracted him to design their home. There is more about the building that I think I read somewhere, maybe on MissPreservation? But it is worth some research. I think they were renovating it a year ago when I was there.

Is that what this building is--Lamar Life?

yes! and St Andrew's Cathedral next door is breathtaking. A lady let me in the last time I was there and I was astounded with the stained glass. I've intended to do a post on it as it has a rich history.

I got a few pictures of the Cathedral, but the angles were all wrong due to distance and oncoming darkness. I am going to give them a try later, though.

Absolutely beautiful. I need a trip to Jackson sometime, I'd like to go to the new art museum, the old Capitol, and then wandering around looking at these buildings.

I think Jackson is growing on me. :) I had a really nice time this trip, got some photos, and had a great meeting. There is still so much to do there yet. I also need to get over to the zoo, as there are a lot of New Deal buildings/projects there, but so far, have not had that much time in an uninterrupted stretch. Old Capitol photos, coming soon!