Read the story of Phila Ndwandwe.  Read the story of "The Blue Dress."  When I first heard about Phila Ndwandwe, and the artist Judith Mason creating a dress of blue plastic for her, I experienced an emotion that has haunted me.  Phila was stripped naked, tortured and then murdered by the South African police force during the last years of apartheid.  At some point before they killed her and buried her in a shallow grave, she found a scrap of plastic bag and used it to cover herself as much as possible.  The scrap of plastic underwear was still clinging to her pelvis when she was disinterred.  When the story was told during the Truth and Reconciliation hearings, artist Judith Mason said:


I wept when I heard Phila's story, saying to myself, "I wish I could make you a dress." Acting on this childlike response, I collected discarded blue plastic bags that I sewed into a dress. (The Man Who Sang and the Woman Who Kept Silent, 1995, in Art and Justice: The Art of the Constitutional Court of South Africa, published 2008)

I do not really know consciously at what point I realized the power of Phila's act, the power of Judith's art, or the depth of my own desire to recognize in a graphic way the courage of Phila.  The image of the blue dress was powerful and I could not get it out of my head.  At some point in the process, it also became about the many brave and incredible women who have been silenced in their efforts to create a just world for themselves and their children. 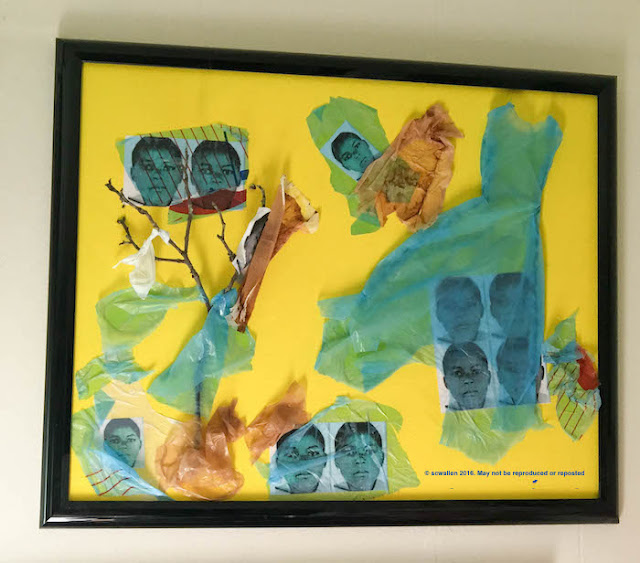 South Africa is not unique: plastic bags cover the landscape of many of our homelands.  They are the careless remnants of our disposable societies, easily discarded to blow in the wind, catch in the corners of buildings and gather trash, or wrap themselves round a tree limb or catch in a wire fence.  Mason called them the memorials to Phila's courage that were everywhere. 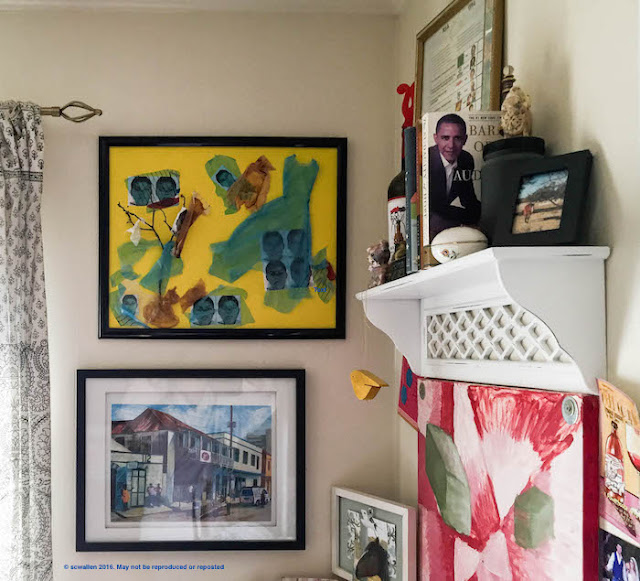 When I finally decided to make another blue dress, it came out of a discussion in my class last fall.  It was a response to Phila's story, and to the untold and unknown stories of so many women.  I initially created it with the intent to take it to the classroom--the scene of so much co-created learning among us during the last fall.  Somehow, once I finally finished my interpretation of the blue dress...I could not yet part with it.  I look at it often thinking about the women who are suffocated, both literally and figuratively in many hidden ways.  I think about Mason's statement about the ubiquitous plastic bags, filling our trees, fences, oceans as memorials and about what that might mean.

Nice post. Even in our "polite, correct" society women are sometimes suffocated or at least stifled. But we forget the opportunities and the privileges we do have.

I really liked this. It reminds me of a story I read about a little girl that had been abused by her parents and kept in a small wire dog kennel. She somehow found a pencil and would take scraps of paper she found on the floor to write stories on. Poor little thing even in the midst of a horror sought to express herself. Stories like this are why I get so mad when I see kids of friends being so petty. Life in America while far from perfect is so much better than what the majority of the world has.

I think history is full of stories of people who maintained some sense of dignity and even at times creativity. I once heard Elizabeth Kubler Ross tell the story of the Jewish children in one concentration camp who used their fingernails to scratch butterflies on the wooden walls of their barracks.

Thank you for commenting on my blog today, and for reading there. This is such a haunting story, one I hadn't known about, and you tell it with such reverence for what was lost. I'm so glad you commented on my blog because it gave me an opportunity to find you. I look forward to reading more here.