Married, with children, for 66 years 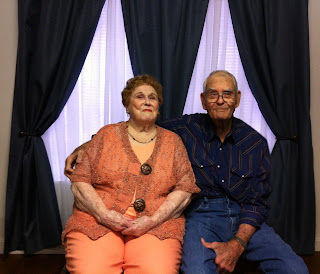 Mother and Daddy married in the summer of 1947.  Dad had come home from WWII where he spent time in India and China, and started seeing Mother again.  They saw each other from time to time for those two years, and that summer before she went back to college at Hardin-Simmons University, she asked, "What would you do if I did not go back to college?"

The next night, he brought an engagement ring.  They married on August 9, 1947.  A year later, they gave birth to my sister, Jane.  They spent a few years up on the plains where dad worked as a ranch foreman, and when my brother was a baby and I was a toddler, we moved back to the area they would call home for the rest of their lives--I assume they have no plans of leaving at this point.  We were in Newcastle, then Seymour, and then Graham, where they have been ever since.

It was a bittersweet trip as the last 4 since December have been.  Ever since I have gone to Alaska and heard the Aleut/Unangan saying, "It is what it is" I have really tried to be more accepting of things over which we have no control.  One night, I said, "It is what it is."  Dad responded, "And sometimes, it is just what it seems like it is."  I was not sure quite how he meant that, but I found it funny and laughed.

It began to storm Wednesday morning about 3:30 a.m., with lightening and thunder, and poured rain.  It was still raining when I went out to feed Rio and Jenny for the last time on this visit, but by then, it was a gentle, steady rain, and one that had been desperately needed.  My sister took me to the airport, and though it made for almost as long a day as driving, it was not nearly as hard.  You don't have to pay attention much when flying other than which gate you need.

I missed feeding Rio and Jenny this morning.  For the first time since Dad got Jenny, she ate out of my hand.  In a world where I feel as if I am rapidly losing control over the things that matter most to me, it seemed like a little miracle.