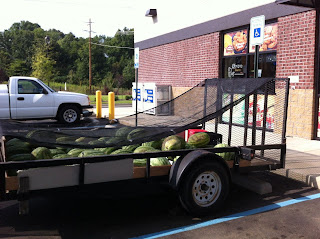 My colleague and I had to go over to Southaven today on some research and stopped for coffee.  "Would you look at that?  An entire parking lot, and they have watermelons in one of the two spaces for ADA parking!"  Of course, I was whipping out my iPhone, and my cane, with my ADA hang tag clearly visible on the front windshield. 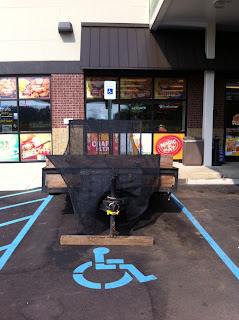 By the time I walked around to the front of the trailer and was taking the second photo, I noted several men, including someone wearing a tee shirt with the store logo scurrying around just inside the window, watching me.  Seconds later, out walked a man saying, "We know, we know.  We have called him to move it, but as you can see, the trailer is attached with a lock and we can't move it."  I smiled and said, "Well, good, I am glad to hear you are taking care of it.  It just amazes me how folks think handicapped parking is expendable when you need someplace to put something."  He tried to assure me that they guy "was young and did not know any better" and "we have called him to come move it."  Really, he said that.  And then he said, "Here, let me get this door for you."  Yes, he said that.


Did the guy park the trailer here while the store was closed?  No one noticed it until the second I started to take a picture?  Is that 2x4 bolted to concrete pillars that are embedded 6 feet or more in the ground?  Frankly, from my perspective as someone who has parked many a boat trailer, it just looks like the trailer prop has been lowered to rest on the 2x4, and there is nothing preventing you from calling the police, who are quite capable of removing this trailer and slapping a big 'ole impound fee.  If this "young man did not know any better" (I confess to questioning the likelihood that anyone able to drive, back a trailer and has a license is so 'young' as to not know that the big blue wheelchair and the sign that says "$200 fine" does not know this is not a place to park a watermelon trailer) does not know this, it is probably a good time to insure he knows for the future.

Sometimes, life is just tedious.  Some--perhaps many--would say it is a small thing and not worth making a fuss over.  But then, there were plenty of folks who thought that about who had the right to vote, or own property, or go to college...
Posted by Suzassippi at 10:27 PM