How about a little gallimaufry?

Bricolage? Salmagundi? Farrago?  Aren't you curious enough to look them up?  I will be waiting for an opportunity to sprinkle these into my conversations when I go back to work this week. 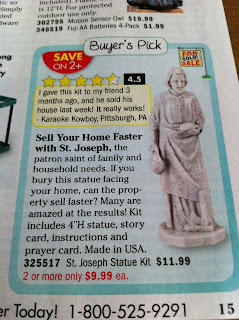 My niece in Texas is in the process of building a new home, and the sale on their current home fell through when the potential buyer was unexpectedly transferred.  They were, of course, counting on the sale for the cash to finish up some things on the new house.  I noticed this ad in one of Mom's catalogs, and truthfully, was laughing about it when I showed it to my sister.  It turns out that there is quite a history to this Catholic tradition as St. Joseph was considered the patron saint of family, households, working men, and expectant mothers.  Initially, it was a ritual that originated long ago.

"It's one of the pecularities of certain traditions among the faithful," said the Rev. Kenneth Borowiak, spokesman for the Lincoln Diocese. "It certainly has no basis in Scripture. It belongs to the realm of pious traditions from the Middle Ages."

According to the U.S. Catholic Information Center in Washington, D.C., the tradition is traced back hundreds of years to Theresa of Avila, who prayed to St. Joseph when the convents needed more land and encouraged nuns to bury St. Joseph medals in the ground as a symbol of their devotion. (Lincoln Journal Star, 1992)

It has now evolved into something of a gimmick, with companies selling a kit that includes the statue, a plastic bag for burying, a prayer, and instructions, as you are supposed to bury the statue head down.  It is still a common practice in those parts of the US that have a high Catholic population and practice intercessory prayer to the saints.

My peach fried pies were such a hit on the last trip home that I whipped up another batch last week.  I sent a picture to my brother, who responded "How rude!"  I told him I would make some for him the next time he came home.  The idea originated so I did not have to turn on the oven and heat up the kitchen in my parents' un-air conditioned home. 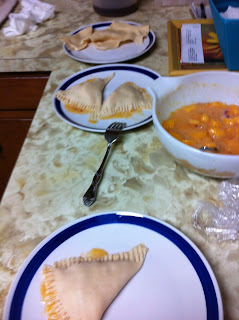 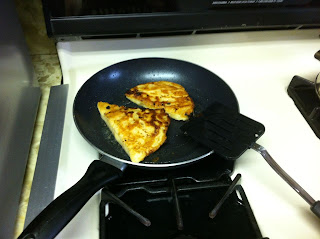 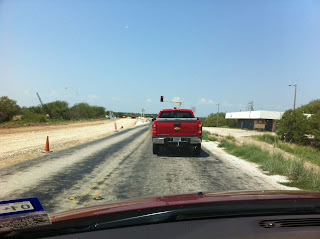 I borrowed my sister's car and drove up to Abilene one day to visit with my father-in-law and go to Lowe's.  Right out of Breckenridge, they were doing construction and the road was narrowed to one lane.  I like how Texas manages the lane transitions 24/7--with a temporary traffic signal.  It seems more efficient than having a flag person at each end of the lane directing traffic. 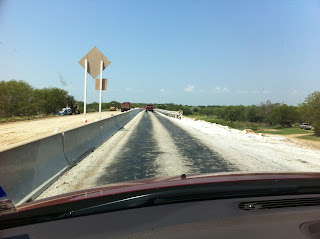 I suppose there is always the risk that someone will be in a big hurry and decide not to wait for the green light, but I find it hard to imagine that even the most fool-hardy driver would risk a head-on collision or leaving the road to plummet into the lake just to shave a few minutes off their time.  Of course, I also find it hard to believe that drivers in Mississippi seem compelled to cross the center strip and take a curve totally in my lane also, so I may be giving folks more credit than they deserve. 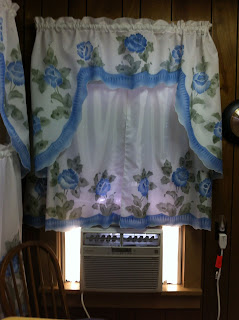 That stop at Lowe's resulted in this spiffy new 10,000 BTU window unit for the kitchen.  My dad does not tolerate cool very well.  We tell him he is like Grandpa, a lizard on a hot rock in the sun.  Dad worked outside his whole life, with summer temperatures in the triple-digits and he still prefers warm to cool.  There are units in the front two rooms, and with fans the house stayed pleasant during my last visit, but this time, I walked in and broke a sweat within minutes.  My sister told Dad we needed to put an air conditioner in the kitchen as this part of the house was just too hot, and especially when we needed to cook.  He said, typically, "We don't need one."  She said, "Yes, we do."  He said okay.  My mother was a bit miffed when we told her, as she has asked, begged, pleaded for years.  I took them one for the kitchen/den several years ago and it sat in the garage, so I was not at all optimistic this time. Dad's chair sits with the back to the kitchen, so it does not really hit him directly and he has not even noticed it.  He had taken to sitting in the den with his shirt off, or at least, unsnapped, and that is something he never did in all the years of my growing up, so we were figuring he was getting a mite warm at times himself.

We spent the week putting up a tinted film on all the windows that reduced heat from the sun yet still enabled you to see through the window, along with new blinds and insulated drapes.  It dropped the temperature in the house by 10 degrees even without the air conditioner.  Cleaning out the horse trough was easier.
Posted by Suzassippi at 12:53 PM

Okay, I did have to look them all up and I was going to see if I could come up with a clever way to use all of them in one sentence but it is 12:30 AM and my brain is fried. :) Thanks for improving my vocabulary, though.