A few weeks ago, I began working with the Living New Deal project, University of California-Berkeley.  It's an impressive project to document every example of New Deal projects ever completed, in all communities.  Many books and journal articles and magazine articles and even a few websites have been published about particular projects, states, or regions.  Living New Deal is the first to attempt to map them all in one place, easily accessible to people.

In addition to that laudable goal, the second objective is to demonstrate how we are benefitting every single day from the results of a 12 year investment by our government in our nation's infrastructure.  And, while I knew it was a massive project when it was developed in response to the extensive unemployment that resulted with the Great Depression, I had no idea of just how big it was until I began working on this.  Now, I never pass the opportunity to find out what New Deal projects are in the communities in which I find myself. 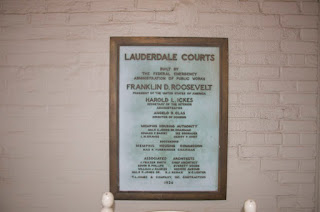 Thursday had me in Memphis on business, and while waiting, a search of the Internet turned up several projects.  I knew I only had time for one, so just started with the first on the list: Lauderdale Courts, one of the first public housing projects in the US.  I plugged the address into the GPS, and truthfully, in the blinding rain driving into downtown Memphis at noon, I was having some second thoughts.  I persevered, and was rewarded. 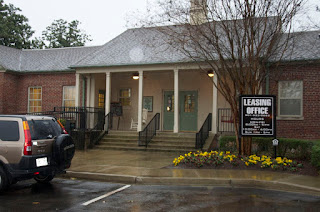 Lauderdale Courts is one of the few New Deal housing developments still standing (Lauderdalecourts.com).  It was built in 1938 in the Colonial Revival style, and was "designed to promote a sense of community" with its centralized mall and courtyard.  It is in that courtyard that a young Elvis Presley gave his first "concerts" to his neighbors.  The Presley family lived there from 1949-1953, when a temporary increase in wages left them ineligible. 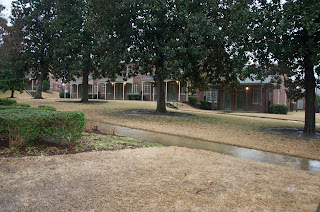 The buildings were scheduled for demolition in the mid-90s, but Elvis fans rallied.  Through the efforts of locals (including fans, developers, and preservationists), the buildings were listed on the National Register of Historic Places, and renovated for rehabitation.

The original 19th century Market Square "slums" were demolished to build the Lauderdale Courts.  Other projects were Dixie Homes, Lamar Terrace, William H. Foote, and LeMoyne Gardens, all of which displaced individuals who were living in the area--albeit in substandard housing with no plumbing or electricity and in a swamp. 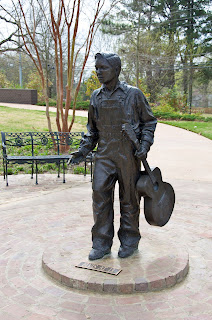 For $250 a night, you can stay in Elvis' old apartment, renovated and restored to period accuracy.  If you listen, you might even hear him, sitting on his windowsill, replicating the blues sounds he heard when he slipped down to Beale street to listen to the black musicians who were inventing a new sound the world would come to love.
Posted by Suzassippi at 10:52 AM

I'm looking forward to more on the New Deal projects. And, I love the statue of Elvis!

Thanks! The statue is over at Tupelo, at the Elvis Presley museum, where their Tupelo two-room shotgun house is also.

There is an intangible way the New Deal had an effect on the environment other than buildings, here in Lafayette County. When I was growing up (50s, 60s), Lafayette County was the "Reforestation Capital of the World" because of the planting of pine trees to control erosion and deal with the pervasive gullies. A major project in erosion control was conducted in a huge gulley along what is now Thacker Heights Road in a study that I'm told had national significance. Walker Evans came here to photograph our gullies (photos I put on my blog not long ago). Thus the largely forested county I've always known. To give an idea of how different it is, you just need to know that during the Civil War there were calvary charges across the Hurricane Creek bottom off Old 7, which forests on the hills and beavers in the bottom make unimaginable when you walk that area now.

Another good example is the neon sign at Main Street and Gloster in Tupelo: FIrst TVA City.

Great project. I look forward to hearing about it.