John Troesser did a delightful piece on Texas Banks architecture, and showcased a considerable number of pictures of those bank buildings.  Among other things, he said


...they occupied the most prominent corners of the town square...architecture rivaled the county courthouse and many were designed by the same architects...with marble counters and bronze teller's cages, small town banks had the interior prestige of post offices.

After the Great Depression the architectural prestige of the bank was tarnished...all across Texas these once noble buildings were left vacant or became Mexican restaurants and antique stores. 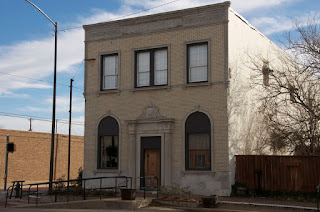 I knew there was some reason I have always loved old bank buildings in small towns...it was the architecture!  (Actually, it really was--I loved the ornateness of the bank buildings I saw--and yes, many were defunct, but many more were still thriving businesses, operating in the "old" buildings and not those "new mid-century designs."  The first bank building I recall with clarity was the old First National Bank in Newcastle, though it was never a bank during the time I knew it.  Already turned into a "domino parlor" with a snack bar, I would go in with my Grandma to fetch Grandpa from the back where he and his cronies were shuffling the "ivories."  Aunt Zenobia ran the lunch counter, and could make the best hamburgers--or at least thought a young middle-schooler. 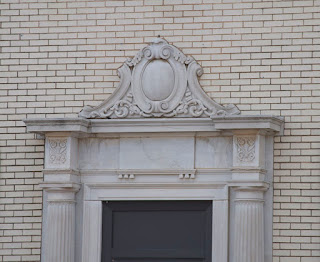 Back in early January and a visit home, my sister indulged me in a trip over to Olney and a few photographs of "downtown."  (For those folks not versed in rural small town Texas, "downtown" was the center of everything.  First time I went to New York City, I had a hard time wrapping my head around the idea of uptown, midtown, and downtown as distinct parts of the city...and then there was that whole South Africa thing and "middedorp" which means mid-town.) 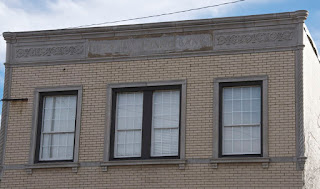 City National Bank in Olney had its beginnings as Campbell Banking Company, established in 1908 (Young County TXGenWeb).  In 1922, it became known as City National Bank.  They merged with First National Bank of Olney in 1935--no doubt related to the aftermath of the Depression and bank losses or failure.  It still looks pretty grand to me.

And just to honor some of the outstanding bank architecture (in Mississippi as well as Texas), here are a few of my favorites:

There's a really great one in Port Gibson so unchanged that Altman used it for a period one in the movie Thieves Like Us.

It's always been sad to me how much that's one of many things lost in the Oxford Square (the Bank of Oxford was one of the two spaces occupied by the Regions Bank-- but back in the day it had those two McCrady paintings now in the Museum. The First National Bank was, before my memory, where the frozen yogurt shop is now, under a nice awning now replaced by the balcony around the Thompson building).