We have all heard life described as a series of ups and downs, mountains and valleys, bowl of cherries or just the pits, and even a big ole roller coaster. This past week has been all of that and more. I suppose it is only normal after a life-threatening crisis that there are ups and downs, given that it is normal in the day-to-day also. Let's just say that the highs and lows have been a bit more intense the past few days, but I hope we have turned a corner.

Dad walked to the barn with me yesterday morning to feed, and then out to the hay barn. Although I have managed to get the hay out and into the trough adequately enough for the past few days, he thought I needed additional pitchfork lessons, so I obliged: "you mean like this? Oh, okay, thanks." Unfortunately, the next lesson was in mucking out the stall. While I understand the concept, and have even done it as a child, it is more difficult as a "seasoned" adult. :)

I had to fill the water trough this morning, which I was in process of doing when he walked out on the deck. I guess he was satisfied, as he just watched. I gave him a verbal hay status and asked if he wanted to walk out and check later or what? He walked to the edge of the deck, looked, and said we would check it later.

Something I have noted over the past week of early rising and beginning and ending my days with farm chores, and a whole lot of other physical labor in between, is that there is a certain pleasure in it that is healing and rewarding, and I have no difficulty going to sleep each night and awakening ready to arise each morning. 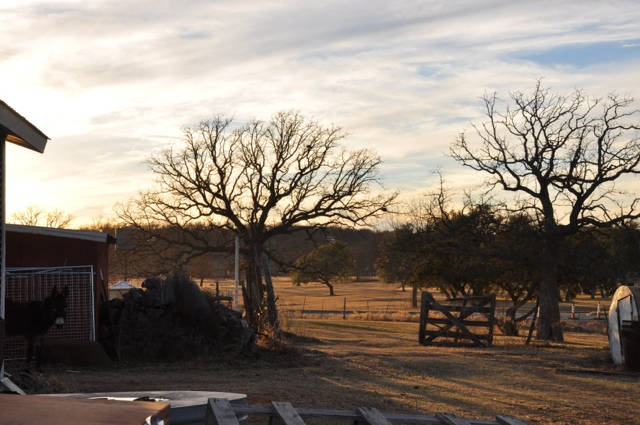