Hamilton Hospital was first established in 1908 by Dr. George B. Hamilton, who joined the practice of Dr. Joe Daniels (Anita Palmer, with Glenn & Kathrine Atchley, Hamilton Hospital Foundation).  The first hospital was in the Cathey House.  Dr. Hamilton provided the funds to build the red brick two-story hospital at the present location in 1927.  It had 17 patient rooms, and among other 'state of the art' amenities, a surgery suite.  I recovered from my tonsillectomy (I was somewhere around 12 or 13) in the room at the corner, facing onto the front lawn. 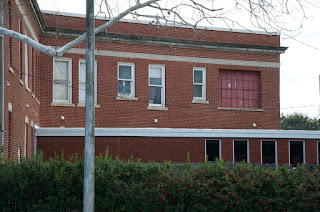 The painted-over large window on the second floor housed the operating room.  In that surgery suite, my mother, father, brother, sister, and I all had surgeries.  It was not unusual at times to see patients housed in the hallways, with a screen around the bed, when there were no beds available in the rooms. In 1945, a hospital annex was added behind the building, made from an old Army barracks.  It added 10 beds.  Other beds were added as the hospital continued to grow to meet the needs of the region, and while patient rooms and medical services have not been provided in this building for many years, a one-story hospital is adjacent to the original building. 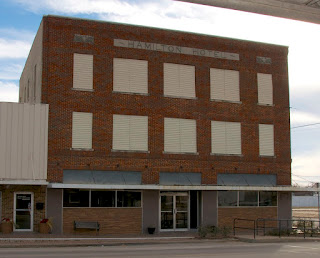 The Hamilton Hotel was located on Main Street, and the Rexall Drug Store was operated from the first floor front of the building.  The entrance to the hotel was on the side.  Letterhead from 1926 described the hotel as 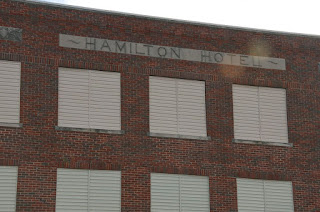 We patronized Cub Drug, located a couple of stores to the left of the Rexall, but sometimes Grandma would take us into the Rexall.  Ah, the smell a pharmacy had back in those days, and all with a requisite soda fountain and a few booths in which you could enjoy your Coke float or malted.
Posted by Suzassippi at 10:47 PM