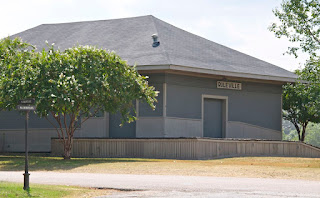 The Yazoo and Mississippi Valley/Illinois Central Depot in Ruleville is on the National Register of Historic Places.  The "railroad vernacular" depot was constructed in 1930 by an unknown architect/builder (Neal, 1998, nomination form for NRHP).  Described by Neal in the nomination form:

The building as seen in 1976 in a photograph in the Mississippi Department of Archives and History shows the asbestos shingle and beadboard references.

The railroad was built in 1897 from Inverness north to Ruleville and was known as the Yazoo Delta.  Locals referred to the train as the Yellow Dog, and there have been several blues songs that used phrases about where the "Southern crosses the Yellow Dog."  You can check out the legends of how W. C. Handy first heard some blues man singing about the Southern and Yaller Dawg in the Tutwiler train station, as well as other lyrics for the Southern and the Yellow Dog at "This Cat's Got the Yellow Dog Blues"-origins of the term Yellow Dog by Max Haymes.


The Yazoo and Mississippi Valley Systems bought the branch and extended the line to Tutwiler; in 1930, the Illinois Central bought the railroad and built the depot.  Two passenger trains ran each day until the 1950s, and freight service continued until 1978.

I think this needs more research. That "Yazoo Delta" (with railroad cars marked "YD") would become Yellow Dog has a certain kind of sense to me, almost like Cockney rhyming slang, but I've never been convinced. On the other hand, it's the best explanation I've heard.

I've always said "no one knows" and noted a couple of explanations, all of which seem like folk entomology to me.

I think there are always a variety of folk stories about where something originates. But whatever the explanation, you have to admit "where the Southern crosses the yellow dog" has a funky cool vibe.