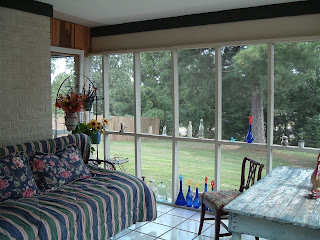 In the summer of 2004, this was my favorite place in the house. I ate out here, read out here, napped out here, played with my dogs out here. This porch was one of the reasons I wanted this house. (Note to self for future: not always a good reason to buy a house.) 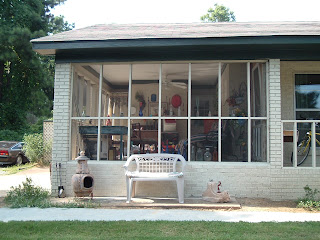 The porch has not looked like this for the past two years however. It has been piled with all the tools from our bathroom remodel--the first one, which we had to rebuild after charming Willie put in a shower without putting in a shower pan or waterproofing the walls--but that is another story in the endless stories of all the things he messed up. Almost two years ago, we tore out the hall bathroom. Yes, to replace a floor that was rotting through where Willie incorrectly installed the tub/shower and it had leaked also. We managed to get the floor, toilet and sink back in, but really could not decide what we wanted to do about the tub/shower.
Randy took off yesterday and today, and combined with his 3-day weekend, we committed to finally finishing this bathroom. The first thing I had to do was clean up the porch. In addition to the toilet, sink, plumbing for the whirlpool tub which has been sitting in J's floor for over a year, it was piled high with other tools, storage boxes, and things better left unnamed. Ever since I lost my favorite spot, it has sort of turned into a catchall big ole trashcan. It was a necessity to clean it up, or else we could not get to tools, have any place to cut sheetrock or tile, etc. 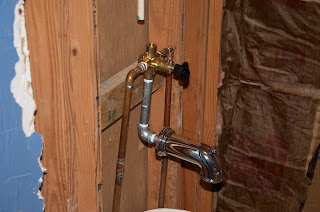 Plumbing, day 1. Randy hates plumbing, but he learned it from his dad, and it is a skill that has been needed in this money pit. 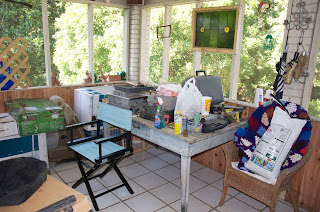 This is a far cry from my porch the first couple of summers, but it represents a major accomplishment after a day's work--and yes, still much to go today. It is the first time in over two years that there has been enough space (and clean enough) that I could actually sit out there. After we finished up yesterday, I popped open a chair and enjoyed a glass of wine. I vowed that I will restore my porch to its former grandeur, right after we finish this bathroom! (I also found all of our missing umbrellas!)

Posted by Suzassippi at 9:11 AM

so how about some pictures of the new bathroom? Your porch looks nice and restful, I'm glad you got it back. I hate re-modeling. I hate the mess too.

You mean the first new bathroom? Because this one is progressing slowly--like day 2 looks like day 1 pretty muchly. LOL I did get almost all of the porch cleaned off, though, and can finish tomorrow.