Back on the road this morning and heading west, we stopped for lunch in Elk City, Oklahoma. Randy knew he would be a while when I spotted this building, and then said, "turn down this street." The Anadarko Basin Museum of Natural History is on route 66, and is on the National Register of Historic Places. It is the site of the former Casa Grande Hotel (which was built in the late 1920s), headquarters of the US Highway 66 Association National Convention on April 27, 1931. It is the site of one of the world's largest drilling rigs, 181 feet tall, visible from I-40, though we were right in front of it. 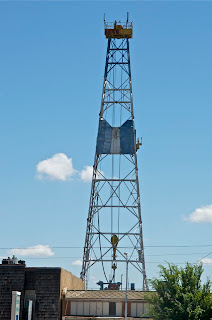 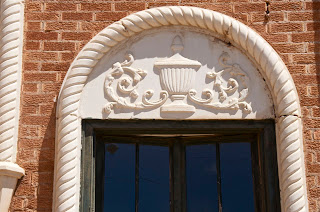 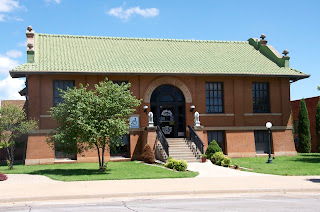 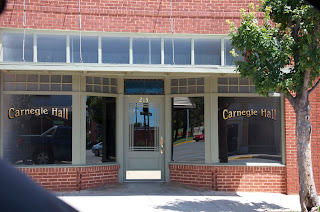 Apparently, New York City is not the only place with a Carnegie Hall. 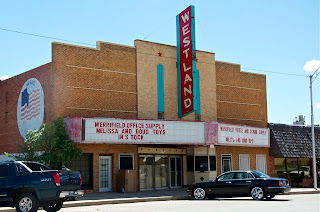 Per Cinema Treasures website, it is "pure Art Deco" and the architect is unknown. 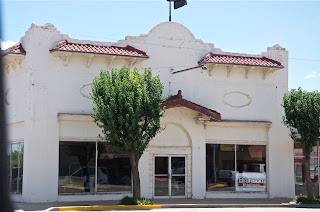 Although I don't know what this building formerly was, it recalls to my mind the early auto dealerships, what with all the large windows. It is currently vacant, though most of downtown seemed booming, unlike many other small towns. 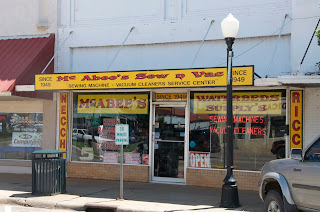 After a quick pit stop and grabbing lunch on the run, we headed further west to Amarillo and a quick stop to see friends and their new baby. This little sweetheart is our friend Jane's (aka Gigi in some parts) newest grand baby and our first meeting with her. 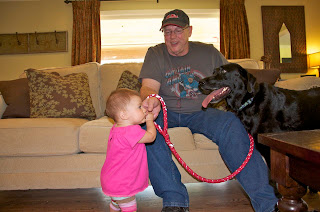 Here, Kate and Emery meet for the first time. Bonnie and Dave have two dogs, one of whom looks a lot like Kate, so Emery enjoyed getting to know Kate. 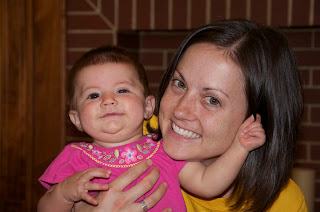 After a quick tour of the house--which Dave was busy working on--we hit the road back for more west. Two more hours and we were in Santa Rosa, our destination for the evening. We had just pulled into the hotel when our friends Jimbo and Bobbie pulled in right behind us. Talk about perfect timing. They joined us here for the rest of the trip to Colorado. We called it an early evening and all are signing off for the night.
Posted by Suzassippi at 10:10 PM

Great to see my g-granddaughter, Emery! Can't believe how big she is! Hope you continue to have a wonderful trip. Hello to Randy too.

Love seeing the sights along your trip. So glad you got to stop in on the kids. Looks like Emery and Kate were fast friends! Thanks for posting the photos--Emery's changed in just the few weeks since I last saw her. Tell Jim and Bobbie hi and y'all have fun!

I have some more photos I thought I'd email to you--she is so adorable.

Thanks for posting the comments and photos of Elk City, OK, where I grew up. The photo you mentioned looked like an old time auto dealership was indeed exactly that. It was the Ford (tractors as well as automobiles and trucks) dealership in the 1940s into the 1960s (and probably before and after that).
Dwight

Thanks so much, Dwight, for the information about the building, and thanks for stopping by and taking the time to make a comment.