I am already in vacation mode, and we have not even left yet. I have papers to grade and final exams to grade. I don't wanna. I'm ready to vacate. 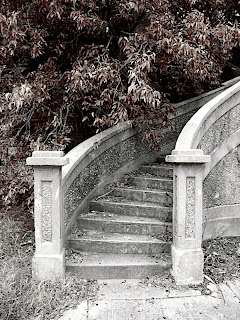 A road trip is always an exciting new adventure, going somewhere where the experience will be new, even if the destination is not. The trail is the thing: what you do along it is what makes the journey interesting. 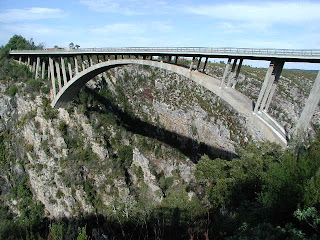 Marty's post this morning got me thinking about bridges--one of my favorite things to see and photograph. The above bridge is one on the Garden Route from Cape Town to Port Elizabeth, South Africa. It was from my second trip to SA (2002), when I was able to spend 3 months and $15,000 doing pretty much whatever I wanted every single day. I was on sabbatical from a university whose president many years ago had the foresight to obtain an endowed fund to support faculty development. 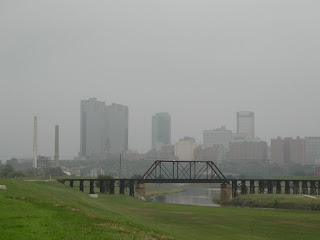 During that trip, I met Courtney and Lira, and 3 months later, that same university helped bring them to the US for their first visit. Here, we showed them downtown Fort Worth on a rainy day from one of my favorite views--a hilltop on a cemetery. 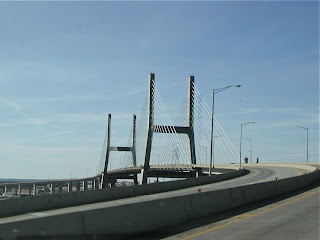 On our first trip to Florida that same year, we drove over this bridge in Mobile, Alabama. This was pre-GPS and we had a disc that played on the computer and mapped out our route for us. The long and winding way through Mobile and the tiny little roads to Winter Park convinced us that technology was not always better than just looking at an old-fashioned paper map and making your own decision about which route to take. 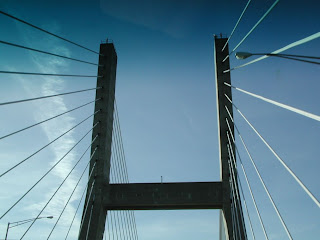 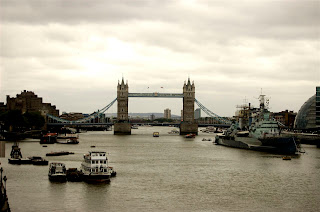 In 2006, I would get an unexpected trip to London--my first and so far, last. Tower Bridge, sometimes mistakenly called London Bridge, spans the Thames. London Bridge actually rather resembles the Elbert, Texas bridge across the Brazos River. 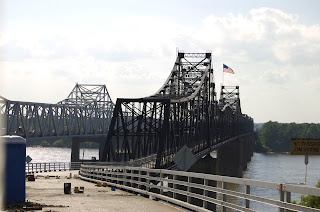 Much closer to home, the year Mom and I moved my niece back to Texas, we made a pit stop in Vicksburg as we were crossing into Mississippi from Louisiana. Though I had photographed the bridge in years before, this was the first time that a security guard actually came out to ask what I was doing. It must have been an orange alert day or something. Although I have looked at this photograph a number of times, today I noticed that a train was actually approaching at the time. That is a prime example of not seeing the forest for the trees. Imagine if I had been that observant that day, what the next few pictures might have looked like. Of course, I also recall that the air conditioner in Mom's truck had gone out back in Texas and we were really hot and wind-blown, and desperately ready to be home after 10 hours on the road. 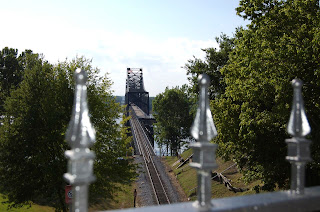 As we head out in the morning, I will be awaiting all the grand new adventures, the picture opportunities, and the time to savor with Randy, Kate, and our good friends. Even if on some stretches of road I will be grading papers and on Thursday night, post grades from a hotel in Santa Rosa, the first day the window to post opens. Technology has come a long way since 2002.
Posted by Suzassippi at 8:58 AM

Love the photos and the stories they represent! Hope you have a lovely vacation.

Have a great time at the beach--I assume that's the beach? I'm jealous.

We'll be in Colorado, in the mountains. I want cool! :)

Love your pictures and stories like my daughter - saame script! Where are you headed this time? I love road trips myself.

BTW, I have a bird I can't identify I know you take pics of birds. I even checked in with the Audubon Society and they were mystified. He is a rosyred bird wearing a slate gray/black helmut with mottled gray/black & red wings. He has a yellow beak and smaller than a robin but not much. His tail is swallow type. Today, I saw 2 of them also a lighter colored female. He's the same color as a Summer Tanager but the markings are different and the tanager does not have the black head.

To Colorado. We are in Van Buren, AR right now. I'll check on the bird.