Day 3 and the loss of optimism 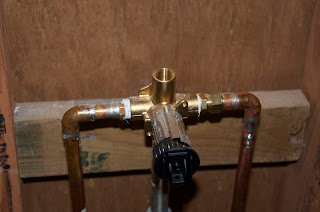 I know day 3 looks a lot like day 1; there's a reason for that. I mentioned Randy hates plumbing. He also hates plumbing with anything that has a lot of connections, which increases the possibility of a leak. Day 2 started out well enough, but then a leak ended that. Another trip to the store and additional fittings and an entire day getting it leak-free took out Friday.
The good news was I managed to go right on working on the porch, and we had room for two chairs by Friday night. 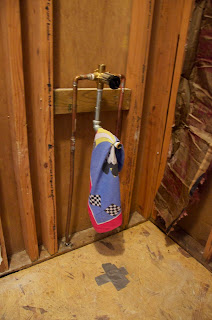 Yesterday, Randy finally finished the faucet and moved on to drilling the hole for the tub drain. All was well for the floor and sub-floor. Then, he was staring at a 2x4 that ran directly under the floor...and where the drain connection had to be. When we replaced the floor last year, he had added a couple of extra braces in addition to the joists that were under the floor, and this was one of them. He knew he could remove it, since he had put it in, but how to do it? He ended up drilling a couple of holes through it and then using the jack-hammer to split the wood. As he was lifting the hammer up, the catch to release the blade was activated and the blade fell under the house. "Well, at least it was only the $25 blade." He still had his sense of humor, but it was waning rapidly, given that he doesn't have much of a sense of humor even on his good days. He taped up the hole in the floor removed his bandana and declared he was done for the day. 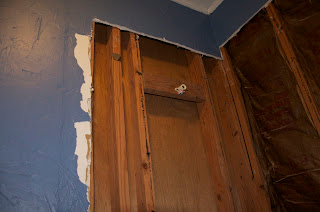 He had managed to square off the sheetrock. I asked him if he planned to install the new shower head holder like sweet Willie had: nail it through and just bend the nails. He said he thought he would use screws.
I on the other hand, did complete the cleaning of the porch. There are boxes and bags of trash lined up next to the trash can, and the tools and boxes of bathroom supplies are neatly lined up along one wall. I discovered the tile on the floor is actually white.
Posted by Suzassippi at 8:13 AM

I feel your pain! How's it going? I remember how much we enjoyed your porch when we came on our road trip several years ago!