There's a new store in Water Valley, and it is my kind of place. I read about it in the MissPres roundup last week, so I thought I would go check it out this afternoon. It is like stepping into a store from when I was a child, back in Newcastle, Texas. (Well, except for that shelf full of micro-brewery beers and ales, that is.) A few shelves line one side, and the produce (mostly local) is in bins in the center. There are refrigeration units for the local Brown's Dairy milk in glass bottles, and the cheeses, eggs, and vegetables. A small freezer unit holds pork from the nearby Pontotoc Farms. 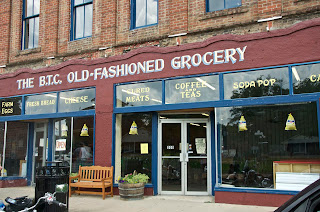 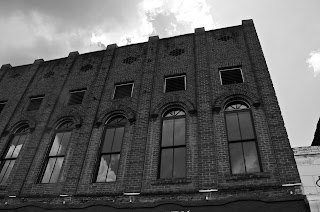 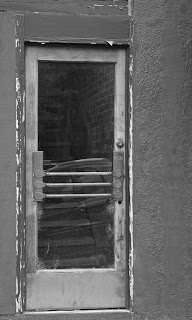 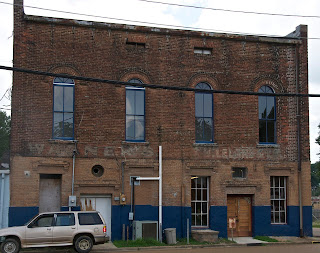 The back of the building still bears the name Wagner's. At one time, there was a Wagner's Department Store in Water Valley (in the 20s, and until Mr. Wagner was killed in 1931). Per MissPres information, the building dates from around 1860. There is a picture on the Water Valley Main Street Association dated 1879 (see it here, under history) that appears to be the building, and the buildings along side it look accurate. However, the historical picture shows a third floor. Interestingly, the windows and the boxed vents above them, appear the same in both the historical picture and the current picture. It leaves me wondering if the upper portion was somehow destroyed and not rebuilt? Having been to Water Valley very often, I don't recall any other building on Main Street across from the railroad tracks that looks like that. I guess I will have to check that out now. 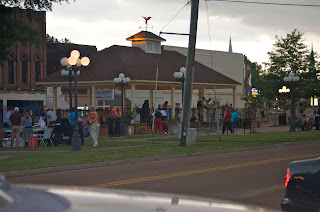 This photo is from last summer, and shows just the far right of the building. It gives a glimpse of what the building looked like prior to the current paint.
I have been in a cooking mood lately, and the menu for the evening is shrimp with jalepeno cheese grits (made with my stone ground local grits), sauteed patty pan squash, and mini-blackberry and plum galettes for dessert. I'll be pouring Kim Crawford sauvignon blanc. Stop on by and get a plate.
Posted by Suzassippi at 5:02 PM

The meal sounds wonderful! And, as always, love your architectural comentary - cheers from Alaska!

I've never made shrimp and grits before (it is apparently a southern tradition in these parts) and it was incredibly good. Smoked bacon, sauteed shrimp, scallions in a white wine, cayenne and butter sauce that screams stop up my arteries, please. All dumped on top of the cheese grits, Traditional New Orleans style does not call for the jalepeno, but I had jalepeno cheese grits in Texas on my last trip and used my poetic cook's license to embellish.