A Day in the Delta Part I

Two important lessons learned for today:
1. Never assume a GPS in Mississippi will actually get you where you need to go; and
2. Always take the complete camera bag, with extra battery pack and digital cards, even if you don't think you will need them. It could be worth the extra 3 minutes it takes you to load them.
On my way to Greenville, I had to make a stop at Batesville at the Lowe's, to pay for the special order toilet seat to go with the special order toilet. It was supposed to be ready for me to just swipe the credit card so they would order it. Nope; appears to be a glitch somewhere in the order; could I wait? No, not really, as I am on my way to Greenville. I said I would stop by on my way home this evening. No problem, they assured me they would have it taken care of and ready for me.
My next stop was the gas station; heading into the delta of Mississippi is rather like going into the plains of west Texas: you should start with a full tank. Hmm...the credit card does not work; what's up with this? I will just get gas at the next town. Meanwhile, I called Rand to tell him the card did not work. He knew. He said he had it shut off, as they did not do online billing and payment. Uh, do you think you could have mentioned that to me? Okay, 19 miles to the next town...but there is no gas station. Not a surprise in this area. My fuel light came on waaaayyyyyy from the next town, and I was sweating bullets by the time I got there and took the first exit...and drove down some street in Clarksdale, knowing there had to be a station somewhere. Finally, just as I was about to despair, I spotted the Double Quick and pulled in. I kid you not, every pump of the 6 pumps was full, with cars waiting. What? There is a sale on gasoline at the Double Quick in Clarksdale? After about 10 minutes, I finally was able to pull into a pump and fill up...$70--I was a gallon less than empty.
My GPS had been loaded since I left Oxford, and it recalculated me back to the road. Zooming along trying to make up for lost time, I suddenly had the message from Nuvi to turn right onto a 2-lane highway that looked like it was headed out into the middle of the field. It did not feel right, but I took the turn. Yes, I finally got to Greenville, but I was positive that I had gone way out of my way to do so. The nice thing about it was it took me into town in an older part, what I would have referred to as "down town" and some of the most fascinating buildings I could imagine.
The next few posts will be about some of those buildings, and others on the way back to Oxford via Hwy. 1. 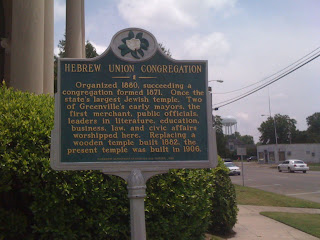 On Main Street, I noted this historic sign and stopped to check it out. When Greenville was incorporated in 1870, there were about 25-30 Jewish families living in the area. The present temple building was constructed in 1906 at a cost of $30,000, and today serves about 50 families. It seems that either the Jewish population of Greenville has not significantly increased, or that they worship elsewhere. 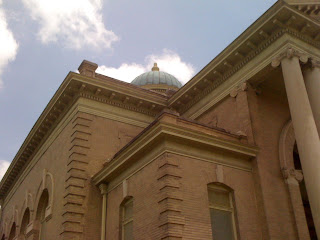 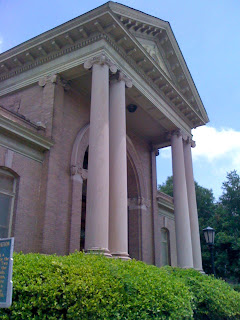 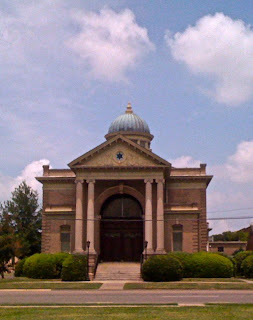 I made a number of stops on the way back to Oxford, and those will be the subject of subsequent posts over the next day or so. I did stop at Batesville again, and not surprisingly, the toilet seat order was still not to be found, and thus, I could not pay for it to get it actually ordered.
Two phone calls to managers and 20 minutes later, "could you come back tomorrow and we will have it ready?" I politely declined to make yet a 4th trip to Batesville just to buy a toilet seat. Interestingly, Rand was able to go online and order it shipped directly to our home, AND in the color I actually wanted.
Posted by Suzassippi at 9:48 PM