Yesterday was a perfect day of blue skies and no wind.  I was sitting outside at 4:30 watching the birds eat and the cats play, thinking what a great day it had been.  The air began to feel colder, and I watched a gray sheet of clouds start dropping down the sky line.  "Feels like snow; air smells like snow."  I finally got chilly enough to go inside. 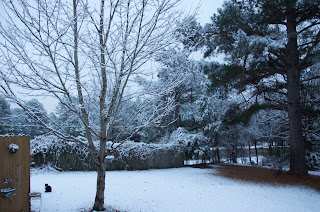 When I opened the blinds this morning, an ethereal blue world was outside the window. 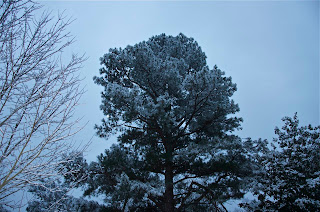 It's just a heavy dusting, rather like someone got heavy-handed with the powdered sugar canister while decorating the brownies and the pound cake. 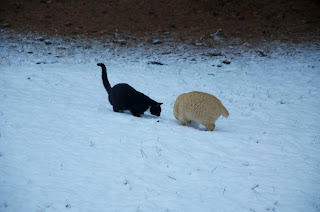 Felix and Oscar are not quite sure what to make of it, though. 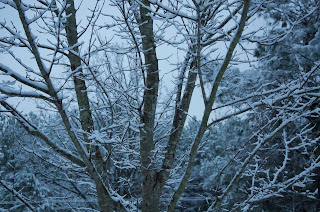 It's dripping off the roof already, and melted off the sidewalk, so it won't last long.  In the meantime, it is the calmest, quietest, and most eerie shade of blue-white out there.  The cardinals are at the feeders, their red feathers making sharp contrast with the white snow.  I was glad (as were they) that I had the foresight to fill the feeders last night. 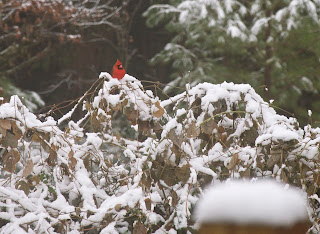 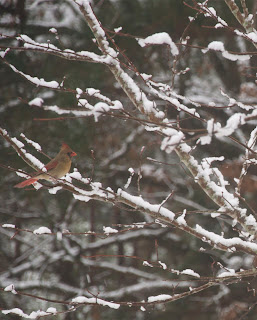 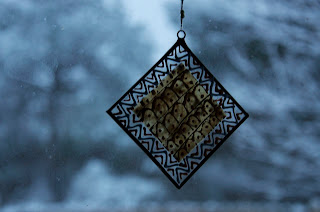 An original t-bag painted ornament from a women's co-op in South Africa.  Though they have a shop at the wharf, and even sell on-line now, I visited the workshop and the creator of the enterprise when they were still quite small and just getting started.  I hang the ornament in my window as I like being reminded daily of people who are working to bring employment, housing, education, and hope for a better future to those who were marginalized by apartheid. 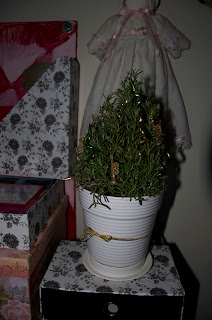 While I have not been in the Christmas spirit for a number of years, I do love the smell of a Christmas tree and the wonderful feelings and memories it evokes of my childhood.  It's too much trouble with dogs and an allergic husband to actually have one, but this year, I made the compromise for a beautiful little rosemary tree.  The smell of rosemary is almost as good as juniper or fir, and definitely less messy.  And, after Christmas, I can eat it.  Maybe I'll even toss a few sprigs in my turkey while it's roasting later on.

But for now, I think I'll crawl back into bed and watch the world outside my window.
Posted by Suzassippi at 8:34 AM

So pretty! I love the look of snow, especially from inside. LOL The cardinals really stand out. Love that red! The rosemary tree is a good idea. We haven't had a Christmas tree since my first year here. Hope you had a lovely day.