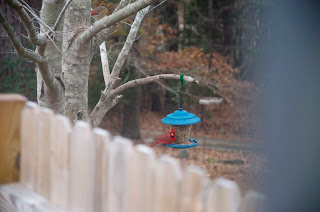 When I saw Meredith's post this morning about the ice in Diomede, I said I would not whine about the tiny little snowflakes falling here right now...but I really do want to.

It's not just the snow and not having water right now, and the fact that Randy is going to have to go chop kudzu away from the well so we can get to it to replace the pump which inconveniently went out yesterday evening.  I'm not sure what kind of weather one has to have to replace a pump on a water well, but I'm guessing it should be above freezing and not having wind advisories that are blowing tree limbs every where.

It was not having to go out and fill up a jug from the tub I keep water in for the cats (and which fortunately was full and not yet frozen as temps are not expected to get over freezing today), in order to flush the toilet this morning.  That just reminds me of growing up in the country in Texas where one's water freezing was every day stuff during the winter.  We lived in an old farmhouse until I was 13, and there was nothing between the walls and outside except the sheetrock and the asbestos siding, and nothing between the tin roof and the ceiling except sheetrock, so I know the inconvenience of winter.

It's really that it is one more thing in a long list of things, right at the end of the semester when I still have papers to grade, tests to grade, and grades to average and post, all by 6 p.m. tomorrow.  I said I would not whine because at least we have the ability to go get a hotel room to be able to shower and go buy extra water for the cooler so we have sufficient water to manage until tomorrow.  I'm actually very fortunate, and I know that.

Friday during the faculty meeting, one of my colleagues mentioned she was going to St. Kitt on her anniversary trip with her husband.  I said that Randy and I used to take an anniversary trip every year...until we moved to Mississippi.  Another colleague said, "And now you don't have to because it's like a vacation living in Mississippi."  She asked what I told people about living here, and I replied, "That it's pretty."  I followed up with: "To borrow from what the Chancellor said this morning about his conversation with a student, 'I have been challenged and stretched here more than any time in my life.'"

While much of it has been the dealing with things like one's water pump on the well going out (is there ever a good time for that to happen?  I doubt it.), or the occasional loss of electricity (like the year I was trying to cook Thanksgiving dinner and it went out just as I put the turkey in the oven), or any of the other hundreds of things that have had to be repaired or replaced in this house in the short time we have been living here, most of it has been in relation to work, and learning how to work and teach in the culture here, which is so very different from where I grew up and the university in which I previously taught.  It has been harder than anything I have ever done, nothing that I anticipated, and yet, the most rewarding experience of my life.

I thought I was from the South, living in Texas.  I was not.  I thought I had a good grounding in diversity, working in the African American and Hispanic neighborhoods near the university, and with Joel, Billy, Odis, Ora, and others in those communities.  I did not.

The most valuable thing I am learning here is how to better teach students who are less academically prepared for college, who may have come from inadequately resourced public schools (the heritage of Mississippi's answer to integration when they developed all the private academies that still flourish in many parts of the state and gutted the public education system).  Although I worked hard at the other university and student evaluations indicated I was effective at teaching, the truth is that it's much easier to teach students who have come from exemplary schools, who are in a higher socio-economic status (it was a private university), and in a program that carefully screened who was admitted.

To have student evaluations that indicate I am effective in the classroom in these less favorable circumstances means far more to me, and to have students excel under the vastly different environment here is far more significant.  For all of those students who have taught me, helped shape me as I try to become the educator that I want to be and can be, I thank them.  It really is about life-long learning, and one thing I do know is while living in Mississippi has not been a paradise most of the time, the journey has been educational.  Maybe that will lead to Paradise.
Posted by Suzassippi at 9:42 AM

"It has been harder than anything I have ever done, nothing that I anticipated, and yet, the most rewarding experience of my life."

That sentence says a lot about life in general. Sorry to hear about the water pump--I can somewhat relate after all of the broken water mains in Jackson last year--but I didn't have to pay for a new pump.

Also, I like the new photo at the head of the blog. Very interesting.
Frank (today's word verification is rejag)