I arrived at DFW yesterday morning and my niece picked me up. We made a few stops along the way home, including the Baker Hotel in Mineral Wells. Sadly, this beautiful building may be going the way of many other of its ilk. My apologies in advance for the quality of the pictures--I opted to travel light on this trip and if it did not fit in my carry on, it stayed home. I brought the Flipcam only. 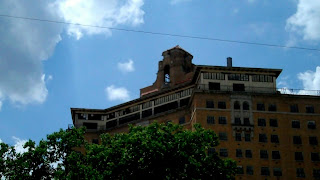 The Baker was built by T. B. Baker, who also built the Baker in Dallas and the Saint Anthony in San Antonio. Mineral Wells became somewhat popular during the early part of the century due to the "crazy water"--the mineral water from which the town takes its name. This part of Texas often saw visitors coming to take the baths, or drink the water. (A post on the drinking of the water later.) The Baker had 14 stories and 450 rooms, and was designed after the Arlington in Hot Springs, Arkansas. 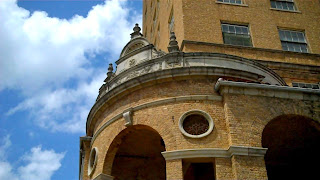 The Baker opened in 1929 two weeks after the stock market crash, and filed for bankruptcy in 1932. It was used as military dependent quarters 1941-44 (Mineral Wells is home to Fort Wolters) and was open until 1963. 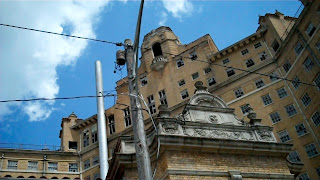 While many locals (in fact, the gentleman who just stopped by my table and said "That looks like the Baker") are and were enamored of the hotel, Professor Jay Henry, author of Texas Architecture 1895-1945, called it "essentially a slab of guest rooms with public spaces at the base." 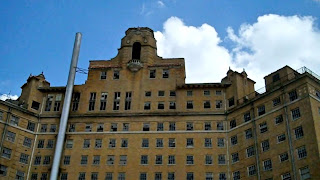 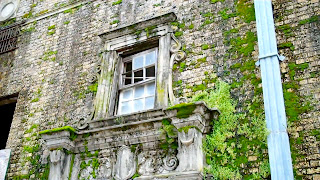 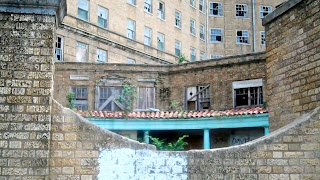 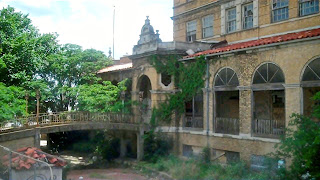 The bridge to the pool enabled guests to reach the pool without crossing the driveway that led to the underground parking garage.
The local resident just told me the hotel is for sale for a song--less than a million, but it is estimated to take $3 million to renovate it. If I had it, I would be right on that.
Posted by Suzassippi at 12:50 PM

She sure has some beautiful bones - restoration would be a wonderfully satisfying project, wouldn't it?

Maybe if we all pitch in, it could be the retirement commune. :)