A Delayed Report of South Africa 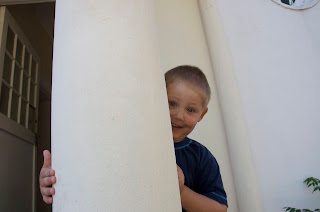 I have not seen Joshua since he was about 10 months old so he was not sure what to make of me, though his mama and papa had prepared him for the visit of Tannie Susan and Oom Justin. While it was a very slow warm up the first few days, he adjusted to our presence and by the end of the trip, was playing and interacting with us both. 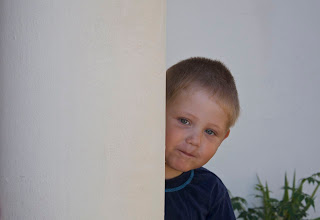 His mama, Lira, said his English improved during our visit. His first language is Afrikaans and while he speaks some English and understands some, he is still learning it after starting to school. As well, J and I learned some Afrikaans words, and often, the household was semi-bilingual. 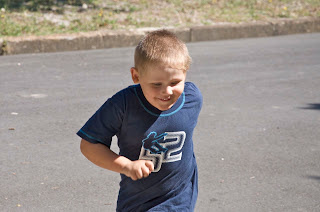 The first day, we met our friend Jeanne and went to breakfast up at Rhodes Monument. Afterwards, Jeanne and J and I drove to Signal Hill to get a glimpse of the new soccer stadium for 2010. Once, this was where the market was held, however, the market was discontinued in order to build the stadium. That was sad to me, not only for the loss of the tradition of the market, but that many people earned their living there. Jeanne says the downtown market cannot accommodate them all now, so they can only have a booth every other day, which also affects their income.
One of the major concerns for 2010 is child trafficking and prostitution and abduction, and social agencies are gearing up with extra security and preparations to accommodate the needs. 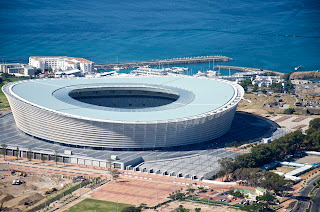 Once back at the house, a neighbor came to visit and brought her little boy who is the age of Joshua as well. He took readily to me and crawled up on my lap. 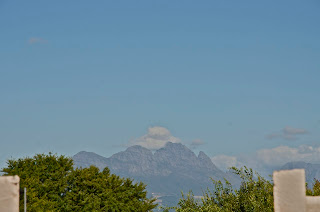 This is the view of the mountains behind Jeanne's house, which is in Durbanville. We went to Jeanne's for lunch the following day (Sunday) where she made a traditional South African meal called brianni. It was a chicken curry kind of dish and was very good. We decided to try a couple of the wine farms in the immediate area (Durbanville Hills) but since it was holiday time and Sunday, most of them were closed. Still, it was a pleasant drive and afternoon since it was terribly hot in the house. Outside, the breeze blows and one can get under a shade tree. 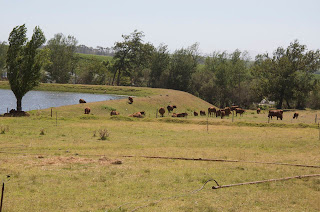 This photo was one afternoon when Jeanne and I had been out and decided to stop by a wine farm. It reminded me so much of a scene one might see in West Texas...except for maybe not so many trees. 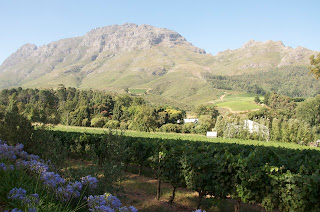 One afternoon following our visit to Aunty Goliath, Courtney, Lira, Jeanne and I visited a couple of wine farms. This is the view of Thelema, which is one of the top 2 vineyards in South Africa. I had always wanted to visit, but they sell out early in the year and by the time May got there for my usual visits, they were always closed. It was a lovely setting in the hills, and I could see why the wine is ranked so highly. We selected a bottle of the Cabernet Sauvignon "The Mint" which had a lovely chocolate and mint nose and finish, and saved it for our last night, but more on that later.
I began to see South Africa in a different light almost immediately, what I call the "2010 lens." I recall my dad saying as I was home Christmas, "Its a shame them spending all that money on a stadium when all those people are starving." J also shed new vision on things, commenting "too many fences." He was unprepared for all the concrete walls topped by razor wire or electric fences--"apartheid fences." I said I understood as this was my first visit to stay in such an area as well. It was very different from the small community in which I normally stay in my cottage and walk everywhere with little concern for my safety, and never having felt threatened in any way.
Posted by Suzassippi at 9:55 AM

Wow- I just caught up on your S. Africa blogs. Sounds like you had quite an adventure, and I'm anxious to hear more. I'm glad you made it safely home and wish your trip had been more of what you hoped it would be.