Sometime while I was in South Africa, a cat took up residence on my porch. Randy found it one morning when he went out to get dog food. It had been sleeping in the little foam softside cathouse I bought for Killer for cold days. Killer preferred to stay outside and sleep on the settee on the front porch, but when it was really cold, she would come in on the screened porch and curl up in her little foam bed. He put out some food and of course, the cat has been hanging around. I saw it one morning as I went out to go to work--a rather unattractive streak of orange, black and gray (what we would have called 'muckeldy dun' back in Texas. That is the only time I have seen it, but it eats the food I put out every day...or at least something does. I also saw a black cat with white paws--which used to hang around occasionally when Killer was still alive. There is actually not much telling how many feral cats may live in the woods across from our house.
This first week home has been quite difficult, in terms of my body's trying to recover from jet lag, getting things together for work--preparing for next week and I had two classes this week, plus our first faculty meeting and a day of advising transfer students. I have been pretty much exhausted by the time I get home every evening. Monday is my 8 am until 10 pm day, so I am trying to gear up for that soon. I have to prepare first day lectures this weekend--there has simply been no time to do it before now.
In addition to the physical roller coaster since being home, it has been an emotional roller coaster as well. It helped a lot to talk with two of my good friends yesterday and to feel supported and valued. I know it is tough for all of us, everywhere, right now in these uncertain times.
It seemed a good time to go back and "revisit" the recent trip to South Africa to try to help me gain perspective again. 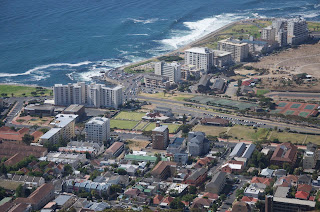 The contrast there is evident, as it is everywhere, between the rich and the poor. This is near where the new soccer stadium was built, and has always been considered a resort residential area. 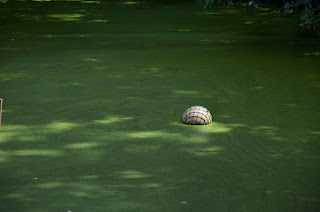 A pond of water in Durbanville Hills--It looks more like a painting, than water. 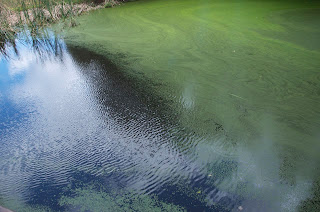 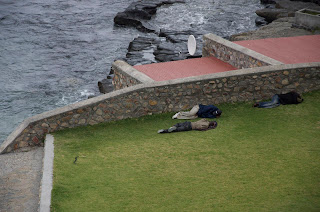 One Sunday, we drove over to Hermanus, another sea-side resort town, for lunch and then to pick up a student who was to return to the residence after her holiday break. There are always two possibilities for when you see men sleeping in a public area: they are homeless and have no where else to sleep; they are sleeping off a hangover from a binge the night before. Note the snake in the far left of the picture.
That day would take us on an adventure way out into the rural area...through pastures on a farm and down a cow trail to "the bush" looking for the student, who turned out to not be at home. Her father walked through the bush to one house (20 minutes) but she was not there. He proceeded over the mountain--over an hour--looking for her. It was getting dark, and we opted to return to the city. It pretty much felt like we were at the ends of the earth...though they had a little kitten also that kept following Courtney around while we waited. 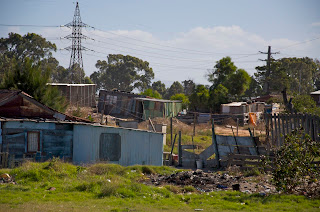 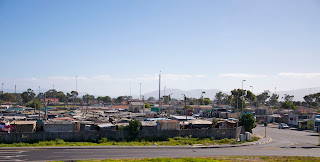 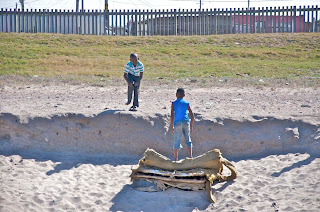 A favorite pass-time of the children in the townships is to turn flips backwards, landing on an old mattress. I have seen this scene so many times. Perhaps it just speaks to the creativity of children and their capacity to imagine--which is likely far better developed when they are left to their own devices instead of something that comes out of a box with a set of rules.
Posted by Suzassippi at 9:38 AM

Your ghost cat reminded me of a story I heard. A woman was working on her patio and a friendly dog came up, accepted a pat on the head and followed her indoors, went over to the far side of the room, laid down and took a nap. After an hour or so, he got up and left. This same pattern continued for 3-4 days. The woman was mystified. The next day before he left, he put a note on his collar giving an account of his daily visit. The next day he returned with another note. "This dog lives in a home with several small children and needs that nap to cope with it all!" So perhaps, that is the story of your ghost cat!

On the other bit, I do find your pictures and info on SA extremely interesting. Your life is far from boring. And, I'm sure you will continue to cope with your full schedule. Maybe you need a nap too!

Susan, its great to read your updates and see your pictures. Praying for you today, on your long day!