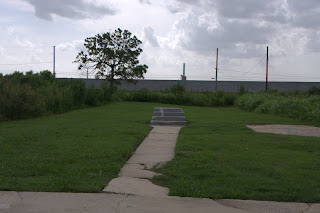 It has been almost four years since Katrina devastated the 9th ward in New Orleans. The levee visible behind these steps is the levee breached by the surges from Lake Ponchartrain. Much of the 9th Ward was destroyed. It was the last area to be opened for return due to lack of electricity and water/sewer, so in addition to the damage from the storm, looting, vandalism, and time took its toll on the houses. Architectural salvage pieces were among the items stolen during the vacancy of the neighborhood. 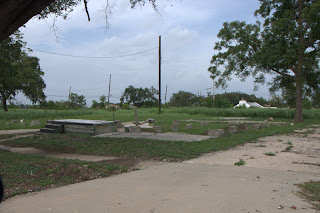 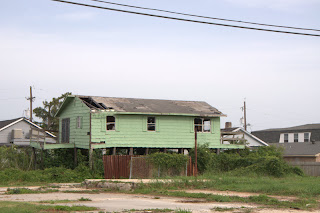 Although houses have been repaired and the community is returning, many areas remain uninhabited and likely beyond repair. 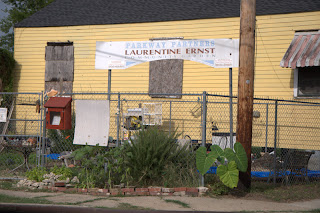 Always a hopeful sign, a community garden struggles to find footing amidst the ruin. 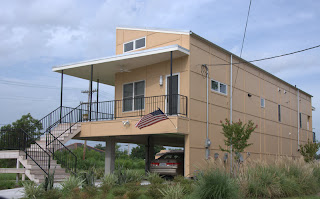 Brad Pitt's foundation, Make It Right, has built affordable housing in the community, and there are new houses being built or planned. The concept is a "modern" rendition of the traditional shotgun or Victorian style houses that make up much of New Orleans and the 9th Ward. 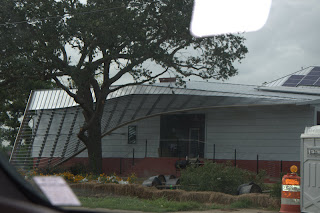 Ecological features include solar heating and energy sources, and trellis work that is designed to support foliage that will provide not only greening, but shade. 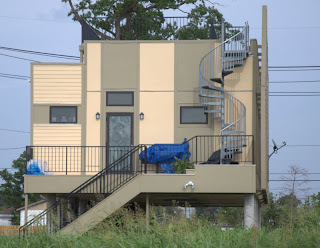 New homes are elevated to protect against future flooding, and include outdoor living space on roofs as well as below the home. 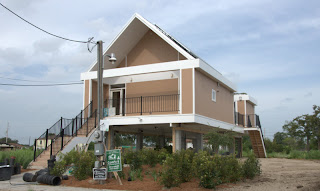 Use of plants to shade outdoor living areas is part of the design, and also contributes to aesthetics of the development. In this design, a small upper deck provides outdoor space shaded from the west sun in the evenings. 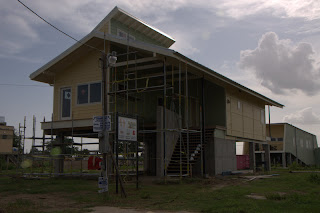 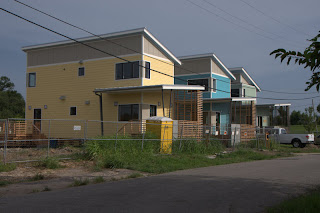 Holy Cross Green Development Project has built these three homes on the opposite side of 9th Ward and has plans for additional development in rebuilding the community. These are located next to the Mississippi, and were named for the Holy Cross school, which was closed following Katrina due to inability to rebuild and repair the damage.

While it is heartening to see the rebuilding and new development in the community, the devastation remains clearly visible.
Posted by Suzassippi at 9:49 AM

It is both heartening and sad. Thanks for sharing.

Thanks for your tour of the 9th Ward. Even though the building appears to be hopeful, I can't help but feel that it won't ever be finished. So sad.