This is Samuel L. Jackson Allen, named after Sam, our Husky we lost to a tick borne illness in Abilene--where no one had heard of tick borne illnesses. Jack was rescued by our friends in Arlington, who called us to come take a look at him. Jack was undeniably the best dog we have ever had--sweet natured, loving, obedient, never ran off, loved to travel. His only fault was due to falling in our swimming pool when he was just a baby, he never learned to love the water. He would get in as long as his feet could touch ground and the water was not up to his belly. 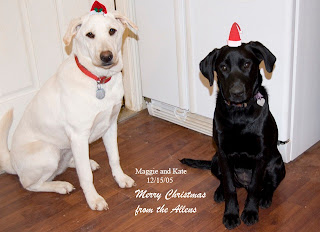 When we got Maggie as a puppy, we still had Jack. It was uncanny how much she looked like Jack. After we lost Jack to a Mississippi tick borne illness--they were never really sure what--we could not look at Maggie without seeing Jack. She was her own unique personality, though, and very loyal to the family. She and Maggie became best friends after we rescued Kate right before Hurricane Katrina. We did not have intention of other than fostering her at first, and she and the other two pups were kenneled on the screened porch. The night of Hurricane Rita, I was sleeping on the porch and the wind and rain got so high that it scared the pups. I put Kate in the bed with me, but the two boy pups wanted under the bed together. That pretty much sealed the deal as far as keeping Kate. 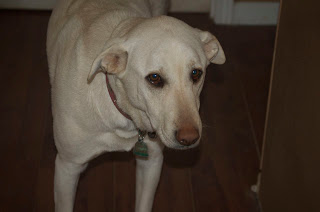 This is the last picture I took of Maggie, late this spring. I have had dogs before, and loved them and lost them for various reasons. They all keep a place in my heart, and I can get teary eyed to this day over Katrina, Sam, and Jack. Last night, I suspect my melt down was a bit due to all of them and Maggie. As we know, each new loss rekindles grief from old losses. So, some of the tears were for Jack last night, as well as Maggie.
I am struggling so--not with making sense of Maggie's death, as there are just accidents. Randy is very emotional still over the loss of Maggie, and because he blames Roadie, has seemed to cut off any feelings for Roadie. Yes, Maggie never tried to get out of the yard before, and quite possibly Roadie is the one who dug the hole and convinced Maggie to escape with him. True, if I had never rescued Roadie last summer, we would most likely still have Maggie. But all those are what ifs and after the fact. The fact is that I did rescue Roadie and he has a place in our home and family--or at least did have. Randy wants nothing to do with Roadie and would prefer it if he were no longer here. I am trying to be patient, and understand that grief manifests itself in many ways, and hope that it may lessen in time. I am in pain, too, but I cannot imagine that the pain will be any less just because Roadie no longer lived here. Roadie is sweet, smart, generally obedient, though still trying at times due to being only a year old. It is not only that I am attached to him, but that he is attached to us.
In a world that has become pretty much a throw away society, I cannot bear to throw Roadie away like his first owners did. I have done my share of not keeping my commitments, and sometimes there are good reasons for not keeping a commitment. This is not one of those times as far as I can tell.
Posted by Suzassippi at 4:15 PM

Susan, I just stopped to catch up on your blog and learned of your losses. I have fond memories of Killer and that patch of fur that could not be reached. And last time I was there, Maggie actually let me stroke her a time or two, and I felt like I had been granted a boon from royalty. Thank you for sharing the Christmas picture.
sa

Thanks, Sherri. Yep, she finally came to trust you, didn't she? Getting a little easier each day.

So sorry to hear about Maggie. If there's a doggie heaven, she's certainly there.

Thanks, Betty. I think so, too.