For over 6 years now, I cannot count the times I have driven I-55 between Jackson and Taylor and seen the exit for "Little Red Schoolhouse." I always thought one of these days I would stop. Today as I headed home from New Orleans, I decided today was the day. It was only about noon, I was making great time having left NO so early, and what else did I have to do when I got home except take a nap?
It is about 3 miles off the Interstate and I expected it to be just an early school house that had been preserved. I was somewhat surprised to see a red brick building that looked pretty impressive--not at all what I was picturing all these years. 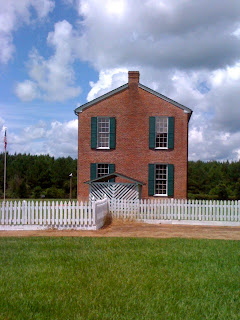 It is well kept and there was a sign near the locked gate that tours could be arranged between 9-3 M-F by going across the road to the red brick house. While I will add a tour to my "someday to do" list, I did not want to add that today. It was enough to drive the 3 miles and see what it was. And what was it? 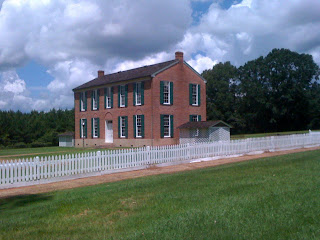 In this building, the school master began the Order of the Eastern Star. I have heard of this organization, but never really knew anything about it other than there is an Eastern Star retirement home on the edge of Arlington that I used to pass on my way home from grad school. 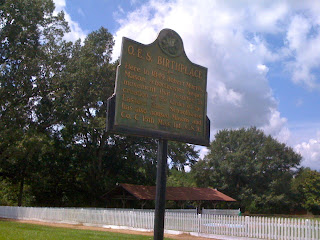 I came home and looked it up, and it is the largest fraternal organization to which men and women both may belong. It is spiritual, but not religious, and open to any faith except "no faith."
Note on the bottom it also housed soldiers of the Confederacy.
Posted by Suzassippi at 4:27 PM

Eastern Star is here in New Jersey. I always thought they were connected to the Masons but it doesn't sound like it. In fact, I thought the E.S. was the female conponent. Hmmm. Interesting about school houses, I used to travel down a School House Lane going to work but there was an early 1900s school house there and renovated into an office building. :) I'm glad you checked yours out.

It's very pretty. Interesting to know a little about it!