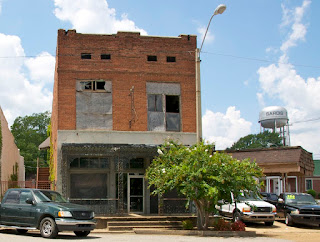 John Wright Johnson, son of Andrew Johnson (born Anders Johnsson, "Big Swede"), followed in his architect father's footsteps.  Andrew emigrated to the US from Sweden in the late 1800s, and moved to Mississippi to design depot stations for the Illinois Central railroad stops between Memphis and Grenada (NRHP nomination form for the architecture of Andrew Johnson, Holland & Gordon, 1983).  The Johnsons worked primarily in Panola County, although John also designed heavily in Memphis (Holland & Gordon, 1983). 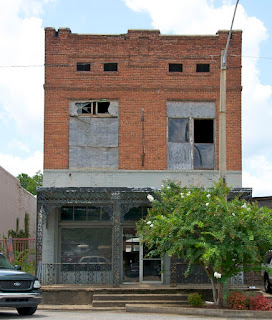 John W. Johnson was the architect for the Sardis Lodge # 307, constructed in 1923. According to the NRHP nomination, John 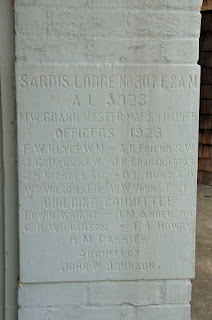 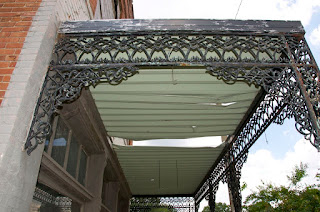 While the building itself may lack Big Swede's propensity for the ornamental, the portico seems like an "embellishment" to me! 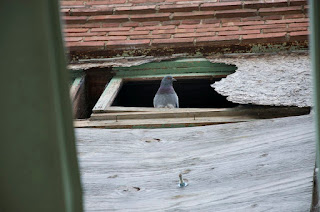 Looking up through the hole in the roof of the portico, I spied this pigeon watching me.  This would lead me to believe that the top floor of the hall is most likely covered in pigeon poop.  The other openings in the upper floor have exposed the building to weather and other varmints as well. 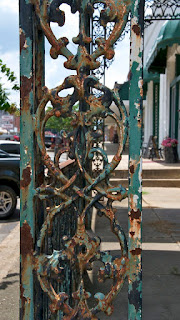 Even though rusted and peeling layers of paint, the iron work is striking. 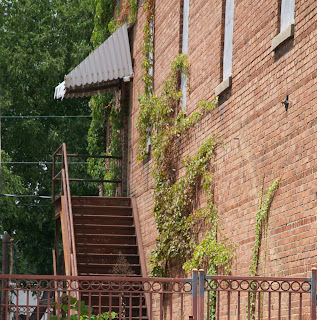 Every time I see an external stairway on the side of a building, I always picture "Doc Adams" from Gunsmoke. 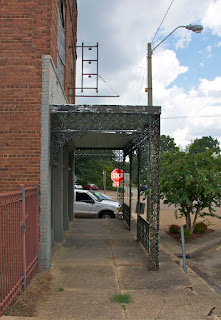 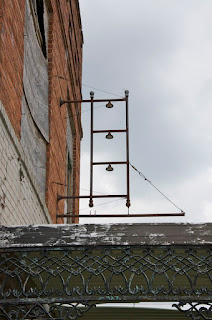 Meanwhile, the remnants of the lighting (a sign?) hold on above the portico, clinging to the wall and looking rather like a forlorn little ladder upon which pigeons might perch.  Sardis # 307 was merged with Panola # 66 July 11, 1996, so most likely, this building has been vacant since then.
Posted by Suzassippi at 4:55 PM

I love these photographs of John Wright Johnson's Old Masonic Lodge building. I've posted it on my website, JohnsonArchive.wordpress.com with a link to your site. Please let me know if you are okay with this. He was my grandfather, BTW.

Thank you for requesting permission to repost my photographs, and for providing credit. As long as you are not using the photographs for commercial use, you are kindly welcome to use them on your website.

Thanks so much. I am currently building a website dedicated to Andrew Johnson, Architect. I'll let you know when it's up.