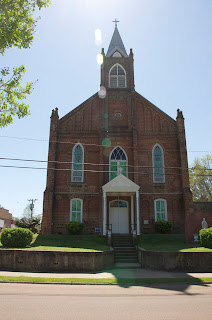 Continuing on toward Martin Luther King Boulevard in Natchez Friday, through the heart of this African American community, I spied another steeple and the back of a large church that reminded me somewhat of St. Mary's downtown.  With good reason I would discover: Holy Family was built in 1894, after a somewhat contentious decision to split the congregation from the mixed race, but white controlled, St. Mary's and establish a separate black church.  Tristano's (1998) micro history is a fascinating look at the origins and development of this parish.  Tristano reports


...founding members were children of white fathers and mixed race mothers...one method of a micro history is recovery of lost people...in this case, lost to Catholic history and lost to African American history... 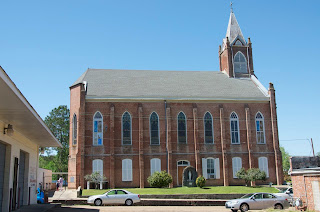 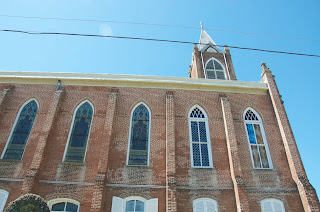 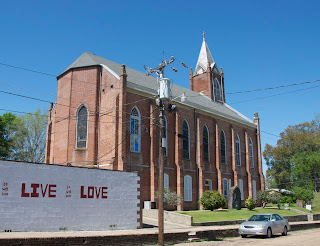 As I parked and stepped out of the car, an older (well, older than I am) white woman also stepped out of her car that had been stopped in the middle of the street.  She asked me about the garage where I was parked, wanting to know if it was a particular business.  I responded that I did not know, I was not from Natchez, and had only stopped to take a picture of this beautiful church.  She proceeded to tell me that if I thought this church was beautiful, then I must go see Trinity Episcopal downtown...and immediately began giving directions and describing the church.  She mentioned the Presbyterian Church nearby, which I said I had seen the evening before.  I did not mention that I was headed out of town, but thanked her for the information.  I was not interested in going back downtown, even to find a church "much more beautiful" than this one.  I suppose it is all in one's perspective, but I looked up Trinity Episcopal just now, and recognized that indeed, I had been standing right across the street from it the evening before.  I was truly glad I had not made the effort.  In my opinion, it in no way compares architecturally (or historically for that matter) to Holy Family.  I will let you judge for yourself, though. 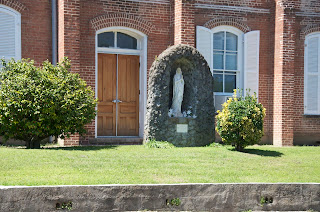