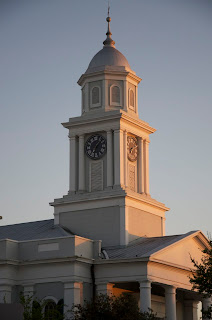 First Presbyterian church was organized in 1817.  The building was completed "on this site on a high hill." (FPC website history).  The present building was erected in 1828-29 after the hill was graded to its present level. 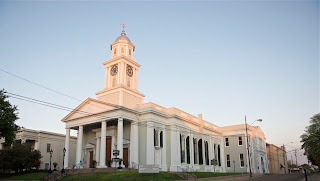 The building is in the Federal style.  In 1830, galleries were added and in 1851, 16 more feet in order to increase the seating to its present 800 capacity.  Stratton Chapel on the east side of the sanctuary was completed in 1900, and is in the Romanesque Revival style.  Stratton houses the Natchez in Historic Photographs collection, open to the public, which presents a picture of Natchez life in the late 19th and early 20th centuries.

Slightly visible to the left of the Presbyterian Church is Trinity Episcopal, recommended to me by the lady I met while photographing Holy Family.  It is interesting to me that even though I had seen it, and photographed the church next door, I had not only found it not interesting enough to photograph, but did not even recall the building.
Posted by Suzassippi at 10:02 AM