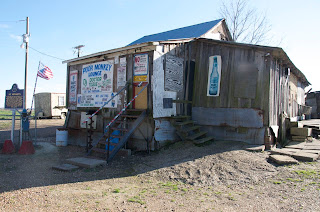 Yesterday when we finished with the planning session for the upcoming Youth Summit, we decided to try to find Poor Monkeys, one of the last original juke joints left standing and operational.  It sits next to a field, down a gravel and dirt road just a stone's throw from the Blues Highway. 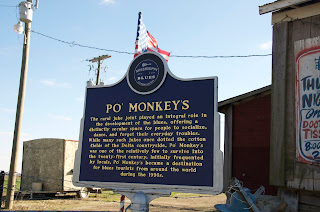 Owned by Mr. Willie Seaberry, the joint got its name from his nickname:  He was called Po' Monkey from the time he was a child. 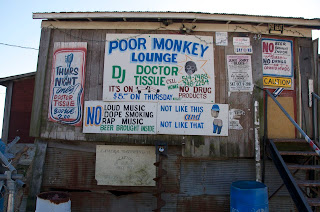 The name originally was a 'jook' joint.  Jook is a word from the African-influenced Gullah dialect off the Carolina coast, and meant "disorderly" or "wicked."  Juke joints were places for relaxation, dancing, and socializing after the day's hard labor ended for rural workers.

Poor Monkeys is famous now, having had several articles written about the place, and Mr. Seaberry, in the New York Times, not to mention all the YouTube videos, interviews, and blogs.  Tourists visit from all over the world, but it is still the spot where locals enjoy a few beers and dance after the work is done.  Notice the white sign below the rules of the establishment?  There is a contribution box for donations for having taken pictures.  We pulled out our ones, and deposited one for each photo we took--we operate on an ethics code!  As Chris got back into the car, he said, "I wonder if there is even any money in there?"  Mr. Seaberry said he may be famous, but he is still po.
Posted by Suzassippi at 10:37 AM