Wilmer, Alabama is a small unincorporated community on highway 98 out of Mobile.  We passed through on our way home from Florida about 10 years ago.  I was fascinated with all the store-front churches along the short spanse of the community visible on this narrow little 2-lane road.  Why did one little community have so many churches?  Who attended?  No larger than this community appeared to be (it is so small, the only numbers I can find are rolled into the Mobile County report), how many folks could there be in each church?  Perhaps it is fitting, as the town is named for Richard H. Wilmer, an Episcopal bishop. 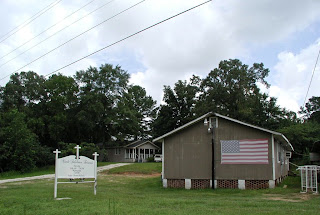 Do you wonder if there is a lot of schism in the community?  'Cause I'm thinking if there is so much brotherly love and desire for salvation going on here, how come there is a church every 6 feet?  What prompts someone to just up and start a new church right next door to a church?  Above is the Miracle Deliverance Tabernacle, which also sported its big US flag on the church wall.  They could have just been zealous patriots, as this was probably pretty close to 2001.  I always had the idea that when Jesus said render to Caesar what was Caesar's and to the Lord what was the Lord's that he was suggesting politics and religion were not in the same domain. 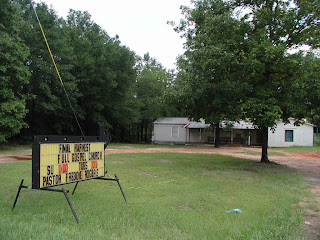 If you are not desirous of a miraculous deliverance, you could step next door to the Final Harvest Full Gospel Church, which has something of a note of...well, finality, to it. 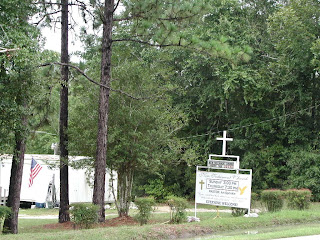 Services here at The New Testament Church are held at 3 p.m. and on Thursday rather than the traditional Wednesday.  That could have been an effort to accommodate neighbors, or possibly Pastor Art was just not an early morning person. 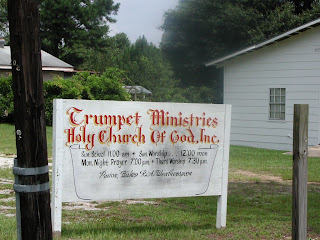 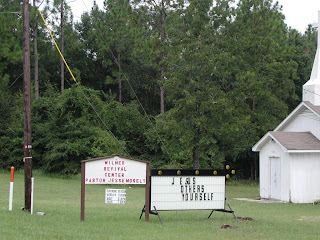 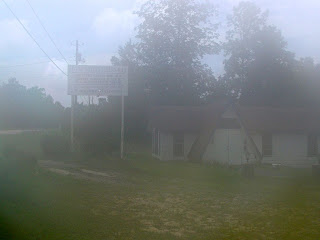 Don't you get a kind of 'other-world' feel to the Living Waters Tabernacle view?  Given it was the same exact day, nano-seconds apart from taking the other photos, I have to wonder about this one.  Was it just the humidity of the moment or some actual time-warp where we were about to be pulled into another dimension? 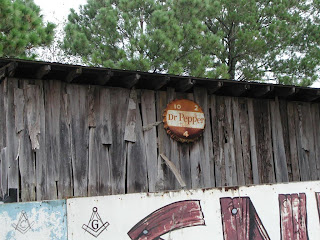 Possibly the only building in the community that was not a church--at least as far as we could determine.
Posted by Suzassippi at 10:14 AM