Things I have, things I wish I had, and things I don't need. 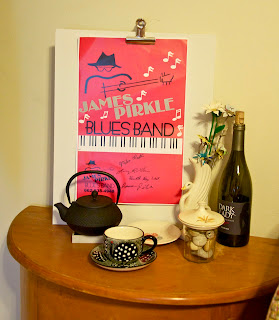 While I was in Atlanta last month, I found a new-to-me South African wine: Doolhof's (out of Paarl) Dark Lady of the Labyrinth Dark Pinotage.  Smooth, silky tannins with a smoky finish.  I wish I had some.

While I was looking for new trays after Kate knocked my other ones off the counter and broke them, I found something I've been wanting: a cast iron teapot.  It keeps the tea hot enough to last through the pot, and one thing I don't like is cold tea unless it is the kind with ice in it.

I have two tea cup & saucer sets of this great guinea pattern that I bought on my last South Africa trip.  I wish I had an entire set of dishes in the pattern.  But, enough of my petty wants.

I drove down to Water Valley Saturday morning to the BTC Old Fashioned Grocery Store.  Just as I pulled into Main Street, I noted the line-up for the Christmas parade.  Oops.  I took a side road, and snaked in and out until I could reach the back of the store a half a block away and walk up to the front door.  The parade was just beginning and from the announcer:


Leading off our parade, and just fresh off a bear hunt, Col. Reb, representing the Col. Reb Political Action Committee.

Huh?  Will these people just never give it a rest?  (Answer: no, apparently they won't, but more on that in a minute.)

I did my shopping for some more of the yummy local grass-fed beef, local pork chops, fresh bread, Mountain Valley sparking spring water, and long-leaf tea.  My check-out total was a whopping $130.  That's not news these days; I spend close to that or more on every trip to Kroger these days for less.  I had 6 steaks, 2 packages of stew meat, 6 pork chops, and 4 chicken breasts, Cora's home-made lasagna, 2 large packages of cheese, pepper corns, 2 bags of tea, a bag of Eduardo's whole wheat linguini, butter, and 2 loaves of fresh bread.  I can guarantee I would not have had that much meat, let alone locally-raised and hormone-free meat, at the supermarket for that amount of money.

Back home, I looked up the Col. Reb PAC.  I think I vaguely remember this from the summer, but apparently, the sole mission of the CRPAC is to introduce legislation to amend the Mississippi state constitution to require Col. Reb be declared the sole official, permanent mascot of the University of Mississippi, and require he be a visible presence at all athletic events, and require his image be on every thing from Ole Miss that has the University name on it.

Really.  I could not make up something like this. So, here we are with the highest teenage pregnancy rate, highest infant mortality rate, highest poverty rate, highest obesity rate, lowest academic performance at reading and math in the nation, poor performing public schools, lack of employment, and inadequate housing, and people want to change the constitution to require the reinstatement of a mascot who until 1979 was not even the mascot.

Whitney Young, where are you?  If ever we needed the great communicator and the great negotiator, it's now.  Something tells me even Whitney Young would have had a tough time with this one.
Posted by Suzassippi at 10:14 PM