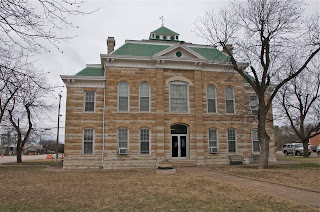 The decision to photograph the Throckmorton courthouse (which spawned the thought of taking pictures of the courthouses in the 3 counties I passed through on the way home) was born from reading an article sent by an acquaintance about youth involvement in rural communities.  The article commented about a group of Cub Scouts seeing a picture of the Throckmorton courthouse in its original form, and how they restored the cupola which had been removed.  Not quite. 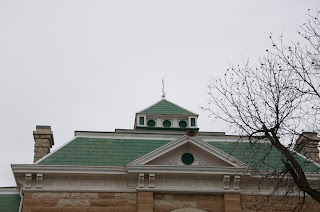 The article made it sound as if the restoration has already occurred, when in reality, it is in the planning stages.  You can see the original tower here.  It was removed sometime prior to 1939 and replaced with this square cupola. 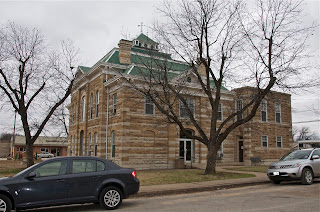 The annex at the rear of the building was added in 1938. 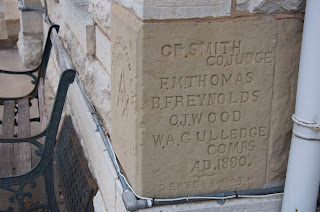 The courthouse was begun in 1890, and completed in 1891.  It was constructed of limestone in the Italianate style by Dewees and Rath, as indicated on the cornerstone.  Trent McKnight, one of those Cub Scouts years ago who vowed to restore the original tower, authored an article in the Throckmorton Tribune that provides some interesting information about the architect.  The National Register of Historic Places lists the architects as Martin, Byrne, and Johnston.  McKnight reported that their name does not appear in any of the county records, and that the "court ordered Mr. Camp of Albany" (in nearby Shackelford County) to produce the plans for the new courthouse.  The Throckmorton courthouse is a twin to the first courthouse in Stonewall County (also a neighboring county) in the now extinct town of Rayner, and it is "unknown if Camp stole the design" or actually worked with or for the firm Martin, Byrne, and Johnston.

Posted by Suzassippi at 3:57 PM