They said it could snow? 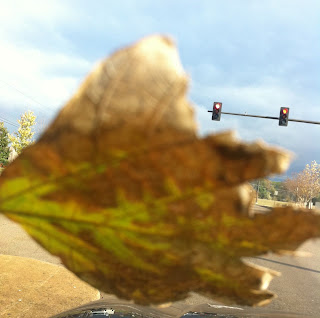 It was cold and dreary today, with possibility of sleet and snow, though so far, that has not materialized.  I had to go to the pharmacy, and the wind was blowing like the proverbial "bat out of hell" as my dad used to say.  I went out to feed the birds and the cats and was happy to see Oscar and Felix curled up together inside the little house I put on the front porch for them.  It is underneath the bench, and has a small opening, with a sheepskin pad in it.  Since it is foam filled, I think it must be keeping them pretty warm, at least for now.  I am trying to figure out what to do when it gets colder since they will not let me get close enough to touch them.  Oscar has taken to getting within a couple of feet of me as I go out with the feed, and walks along side of me meowing.  I don't think he is actually afraid of me any more, but he still won't come to me. 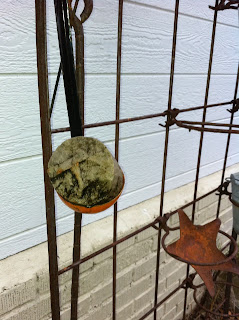 Years ago, I picked up this rock from my Grandma's house in Young County, Texas.  I always thought it looked like a face, and kept it outside my kitchen window back in Abilene.  I could look out while washing dishes and it would remind me of her, and her rock collecting.  Just a couple of days ago as I was sitting outside watching the birds eat, I was thinking of Grandma.  She grew up really poor and always had to just "make do" with whatever was available.  During the Depression, many the nights that supper was biscuits and gravy.  If something needed patching, she just found whatever she could to patch it.

I was thinking about that because I had just "patched" Libby's kennel where I discovered she had been digging along the fence.  Libby was always the digger, and she has left plenty of holes in the back yard from years past.  Since she had to be separated from the other dogs and has her own yard, she had not been digging...until recently.  I looked out one day last week to see a big hole next to the fence.  I put a few of Grandma's big rocks in it, and that kept her from digging for a couple of days, but then she just moved down to a new spot.  I had placed 3 long pieces of petrified wood that I brought from Grandma's place on the outside of the kennel fence, and then used the metal legs off my yard flamingo to act as stakes so she could not push past them.  After I finished, I propped the rest of the flamingo on the rocks and suddenly realized how much of my grandma is in me.  There was an immediate need, and I did not have the needed supplies, so just tried to figure out how to "make do" with what I could find at the moment.  Once it's "fixed" there doesn't seem to be any reason to go figure out another way to do it at the moment, and it gets to be something else that I will get around to one of these days...or at least, that is what I tell myself at the time.
Posted by Suzassippi at 6:08 PM