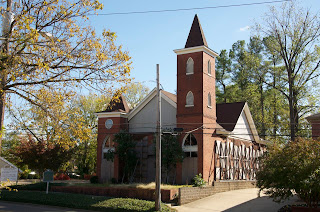 The Burns M. E. Church was originally known as Sewell Chapel, built in 1869-70 on the current site.  It was Oxford's first African American church and was constructed on the edge of Freedmen's Town.  The one-story, three bay, brick masonry center aisle church building with Gothic Revival influence was constructed in 1910.  The church had been renamed Burns in 1900.  The congregation outgrew the original wood structure. 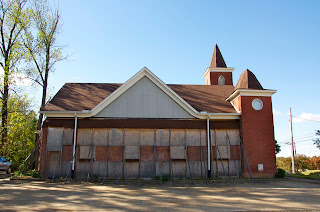 When the Burns congregation outgrew this building in 1978, they sold it to a local couple who used it for office buildings, and gave it the name "The Belfry."  Oxford novelist John Grisham used the building for a while, and donated it to the Oxford-Lafayette County Heritage Foundation for use by the Oxford Development Association to promote cultural and historical African American events. 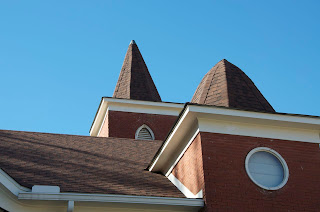 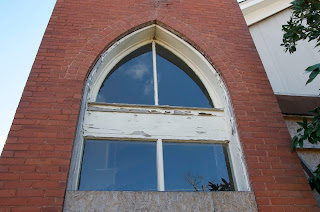 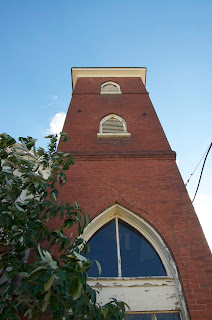 The bell tower.  The original bell was removed to the location of the new building. 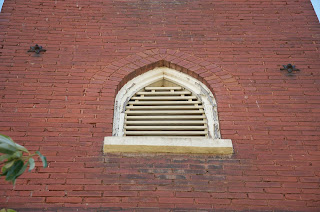 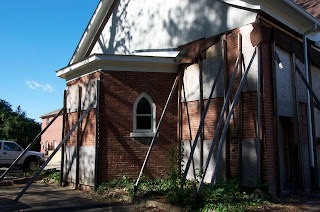 The OLCHF received a grant from the Mississippi Department of Archives and History to begin the restoration some nine years ago.  The building was stabilized, but little else has been accomplished since then.  The foundation and the Oxford Development Association have been fundraising to create the required match for the MDAH grant.

Recently, the US Department of Housing and Urban Development awarded a $500,000 economic initiative grant for the project.  The Oxford Board of Aldermen voted October 19 to accept the funds and awarded a contract to local firm Howorth and Associates (who have done other historical renovations in the community).  Phase 2 of the project is supposed to be completed sometime in 2011.  This involves the restoration of the exterior of the building.  A photograph on the Howorth website indicates that the interior was totally gutted in phase one stabilization, and the roof replaced.

This location is near the downtown square, and considered prime developmental real estate.  That the church has not been demolished for the lot (as it apparently almost was twice) is testimony to a lot of work by a lot of people.  It says that sometimes, history and culture are more important than another condo in Oxford.
Posted by Suzassippi at 4:49 PM

Very interesting! What were you doing - wandering around Oxford and getting a little history?

I drive by it almost every day, and always meant to stop and take some pictures. It was sunny and pretty that day, and I had a few minutes while out running errands and just put it on my errand list.

I do think it incredible that it has been saved, given how much real estate close the the square is worth.