J's in a cooking mood 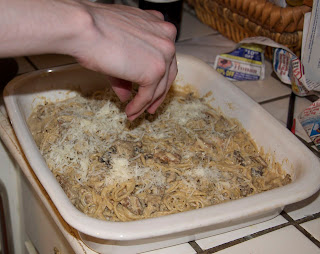 J made chicken and mushroom tetrazzini for dinner last night. He has apparently been in a cooking mood while we were gone, and has tried a variety of new recipes, including this one. 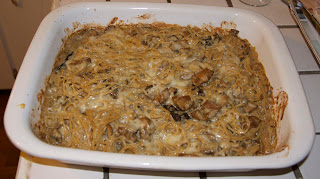 It was delicious; I have nothing with which to compare it, never having eaten chicken tetrazzini in my life, but I really enjoyed it--particularly the not having had to cook it part. I tried not to think of the pint of cream and the pound of parmesan in it and just savor the flavor. I had eaten healthily all day long to that point.
He related a number of lessons he had learned from his cooking adventures of the week, and rattled off the list of things he would never again do:
He also added a new food item to his prep repertoire and said he had enjoyed sauteing spinach, however. I advised him that one can buy pre-grated parmesan, and pre-chopped garlic, although the only pre-stuffing is that which comes in a box in the frozen food section.
He diligently chopped mushrooms and chicken thighs, grated parmesan, and after sauteing his chicken and mushrooms in olive oil and adding the white wine, reduced the stock and then added his cream and parmesan. He decided that although it took a lot of work the first time, he thought this was a dish that once you have prepared a few times, would go much faster.
I hope he will be in a cooking mood again tonight as well, although he does tend toward those dishes that are rich and creamy and slightly on the Italian side.
Posted by Suzassippi at 1:09 PM