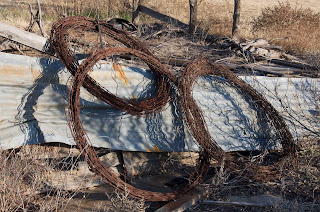 Texas Olympic Rings
Due to the blizzard Christmas Eve, I could not finish the post about the pasture. I had spent the afternoon in the pasture Wednesday, in the warm sunny upper 70s. I was intrigued by all the rolls of barbed wire all over the place. It hangs on gates, fence posts, tree limbs, and in places, is wired to something. 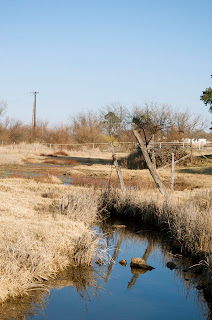 The creek keeps a trickle of water running through most of the time, but during heavy rains, it will spread out like a small pond. 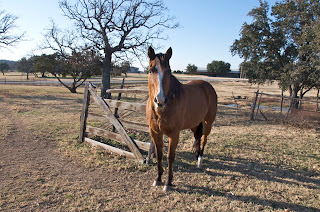 Dad's horse, Rio. Dad has not felt well enough to ride in a month he said. It amazes me that at 84, he still gets on a horse. 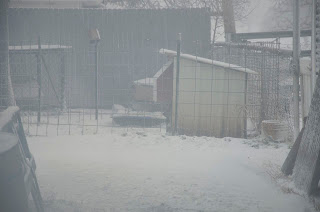 The snow began falling early morning Christmas Eve, but by mid-afternoon, it had been labeled a blizzard. I was on my way to the grocery store and Dog was in his house, watching the white stuff--not sure if he has seen it much. 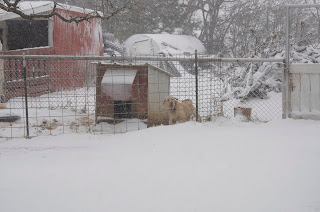 After I got back from the store, I could hardly open the door to the porch, and mentioned I needed to sweep the snow back before we could not get the door open. Dad refused to let me and went out to get his shovel. I waited until he was on one side of the porch and since he could not see me through the ice and snow on the glass door, I went out the other side and started shoveling the big side, which leads to the barn. The snow was blowing into our eyes and faces as the wind was blowing so hard. He got over to my side and asked "What are you doing?" I replied helping a stubborn old man shovel snow. He laughed and we finished the porch and steps.
He decided to go ahead and feed and as he was breaking up the ice on the water, I got the dog, cat, and horse feed and fed them. We had to take the feed over to the barn as Rio would not get out of his stall to come eat at the usual place. I don't blame him, it was still blowing snow and it was icy. We forked hay into his hay manger, fed him, and made our way back to the house through deep drifts of snow. 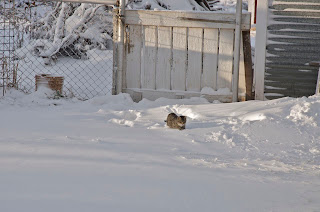 After depositing another few inches on the decks we had shoveled, it stopped, got calm, and the sun came out for a few minutes. The cats ventured out--this was definitely their first time for snow as they are still in late kittenhood. They were playing in it, leaping and frolicking.
I made pozole and cornbread for dinner and the temperature was really dropping. It got down into the low teens (which is nothing to you Alaska folks, I know, but pretty cold for the south!).
This morning, the sun came out and it began to warm up. I made Christmas lunch since I needed to get back to Abilene before the temperatures dropped again and the roads froze over. 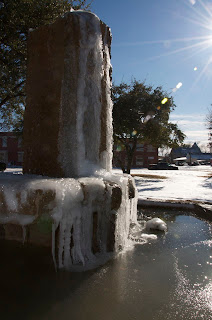 Here is an example of why one should not use fountains during the winter! 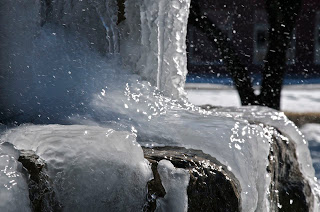 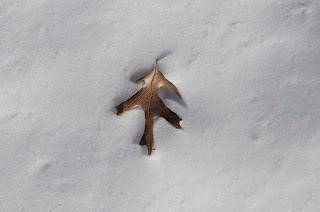 One last beautiful reminder of the beauty of fresh snow, and then I tromped through the nasty slush to get back to the truck and finish the road to Abilene. Randy is cooking Christmas dinner now and we will eat in a bit (just he and Chet and I). We will leave early in the morning and go home to Mississippi, hoping all the Interstates are clear enough to be open. I am more than ready for my little Taylor cottage on the hill.
Merry Christmas to all!
Posted by Suzassippi at 4:45 PM