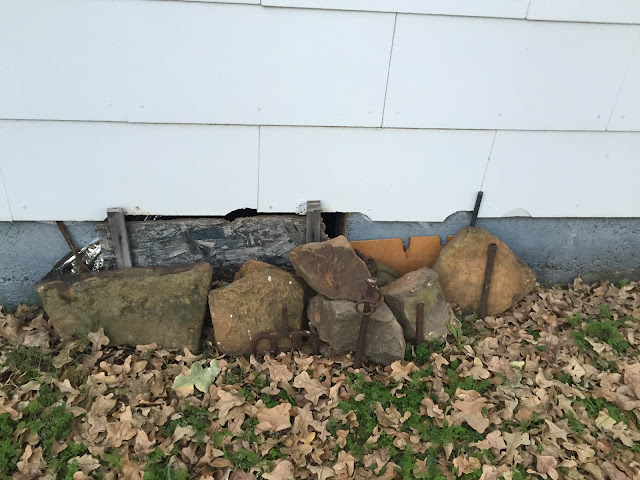 When I got home Thanksgiving week, sis advised a skunk was under the house. She had been taking Tinka out on a leash after the first night that Tinka ran over in a full charge and got a snootful of eau de Pepe Le Pew.  She had closed off the crawl space and winterized the opening with the foil sealant.  Sis underestimated the skunk, who merely pushed the foil seal aside and went on his or her merry way.

The following day, we added the large rocks and I secured them with metal stakes so they could not be rolled away or dislodged. 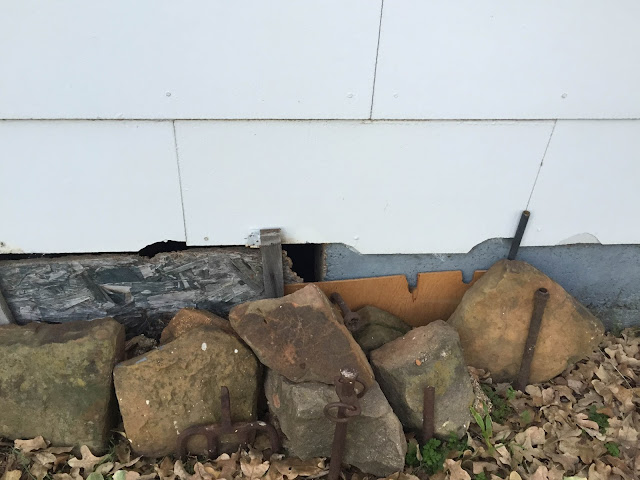 Later, I went out to check...and duly noted the little critter had chewed a hole in the board that has blocked the crawl space for years, and climbed over the rocks.  He probably even thanked me for making his entrance more secure.  Cue the Internet search for skunk removal.

The trick according to the University of Nebraska professor whose scholarly paper on skunk removal (I am not kidding here--yes, a scholarly journal article, but I like to trust my sources of Internet information) gave the following suggestions:


Pour flour around the opening during daylight hours.  After dark, examine the flour for footprints leading away from the opening.  Once you determine the skunk has exited from under the building, secure the opening with sheet metal and metal stakes.

We sprinkled the flour around the opening, and checked after dark for foot prints.  Between the dew moisture and the wind, we could not be sure there were any footprints.  I suggested we rake away all the leaves, remove the rocks again, and then try again.

Things always seem to have a way of happening, do they not?  Every day brought a list of things that were more pressing and by the time the end of the day would come, or dark, we were no longer much inclined to go outside and battle skunks, and would put it off until the next day.

Friday I packed and loaded to leave for the trip back to Mississippi, so there went the last opportunity.  I confess, I did not want to risk an encounter with eau de Le Pew and then have to drive 12 hours with it.  Ah, the joys of country life.
Posted by Suzassippi at 10:21 AM

Maybe. LOL She is still working on it.

I am so very sorry that this has happened to you!