Everyone who remembers "tornado drill" in elementary school, raise your hand.  I remember Seymour, and marching single file into the beige ceramic tiled walls of the hallway, sitting down with your feet drawn toward your body, knees up, and your head resting face down on your knees with hands and arms locked over and behind your head.  Last night, we did it for real here. 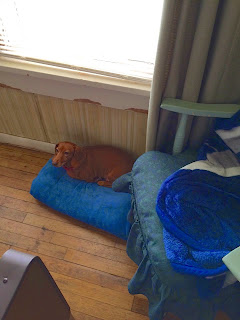 Tinka is developing her new routines of not being attached to mother's hip, and we are all adjusting as well to the changes.  For the most part, it had been a pretty good day.  Our regular daytime caregiver was off, so Sis and I were covering and had planned to take mother to get a manicure and pedicure when the afternoon caregiver arrived.  It pretty much went downhill after that.  It was probably fortuitous that mother decided she did not feel up to doing that.  Sis went out to her house to check for storm damage from the storm the night before and I went to the grocery store.  I was taking some scraps out for the feral cats after supper and saw Sis had returned and was trying to put a packing quilt across the back of her auto.  I had suggested that earlier as a few inches extend from under the carport and her other vehicle sustained hail damage parked in that spot a few years ago.

We were standing in the breezeway talking when Shea came out and said tornado on the ground in Throckmorton and moving our direction.  I had earlier in the day been thinking about preparations as the predictions were more storms and worse storms than the night before.  Sis already had a plan and we went to work getting pillows and blankets in the hallway, chair for mother, and moving anything deemed a sharp projectile.  All the hall doors close except the one from dad's room to the hall way.  We moved the chest in his room so we could roll his bed over to the far wall and his head as close to the hallway as we could get.  It left just enough space for sis to stand in the hall and be next to dad.  We had a large wedge pillow that was placed between the rail and his head, and drapes were closed against  the blinds at the double windows.  Dad was not at all happy to have his drapes closed as one of his pleasures is to look out those windows at the small part of the outside world he still can see.

We watched the storm's movement across the county toward us, and when they announced the "take shelter in the next 5 minutes" we moved into action.  The TV lost power, and the Internet went down, so we could not track anything, but I could still text with Randy.  He monitored the radar for us, and gave us updates.  Finally, he said it appeared to have moved south of us. 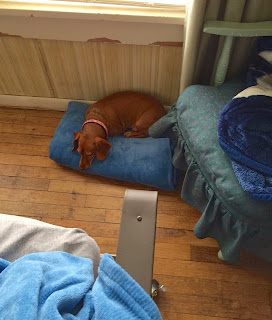 It reminded me of all the times as a child we spent the night in a cellar, either at my grandparents or down the road at our neighbors.  As an adult, I have had to take shelter in the house during a few tornado warnings, once in Mississippi, and a few times in Texas.  You know that it is not the best protection, but sometimes, it is all one can do.  As we were restoring order, and rolled dad's bed back into place, he commented that preparation for something that might not happen was the best plan.  I was reminded of all the times growing up when dad was the "spotter" at the back door or the back yard, watching a storm.  We never had a house with a cellar, so unless we had ample warning, there was never time to do anything but go to the safest place in the house.  We had no cell phones that could track radar, or warning alerts on your phone, and it was a different world.  And then, something we never thought about before now, Sis and I were the ones protecting mom and dad, calmly taking control in the same ways we had seen dad do it for us.

Life really is a circle and a cycle and a system.
Posted by Suzassippi at 9:53 AM

I never worried about tornadoes growing up. I grew up in the Kilgore Hills in Clay county and the lay of the land is a natural windbreak and knock on wood we've had several go around us but never had one close to the house. Now moving the prairie down here is a different experience. I've had two big ones go right over the house up in the air. For one I was at home and was really afraid, huddled up in the hallway with me, the dog, and my phone. Tornadoes are so not cool.