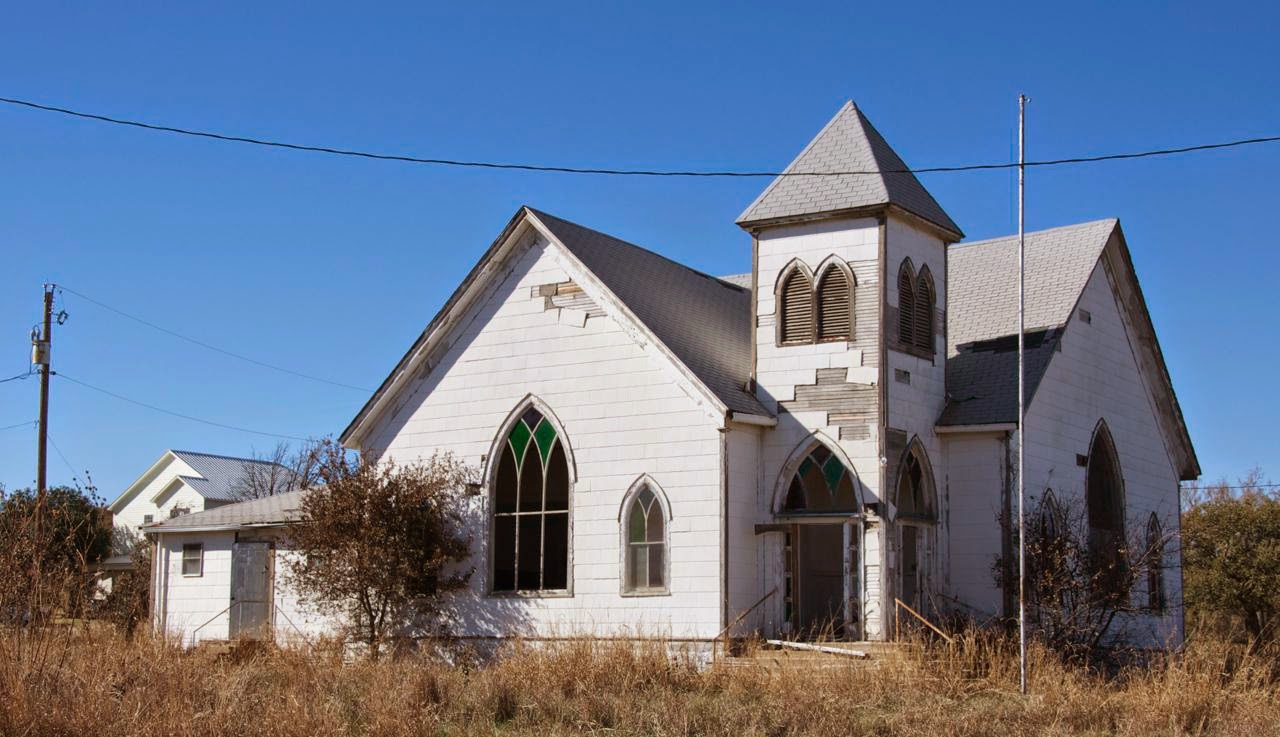 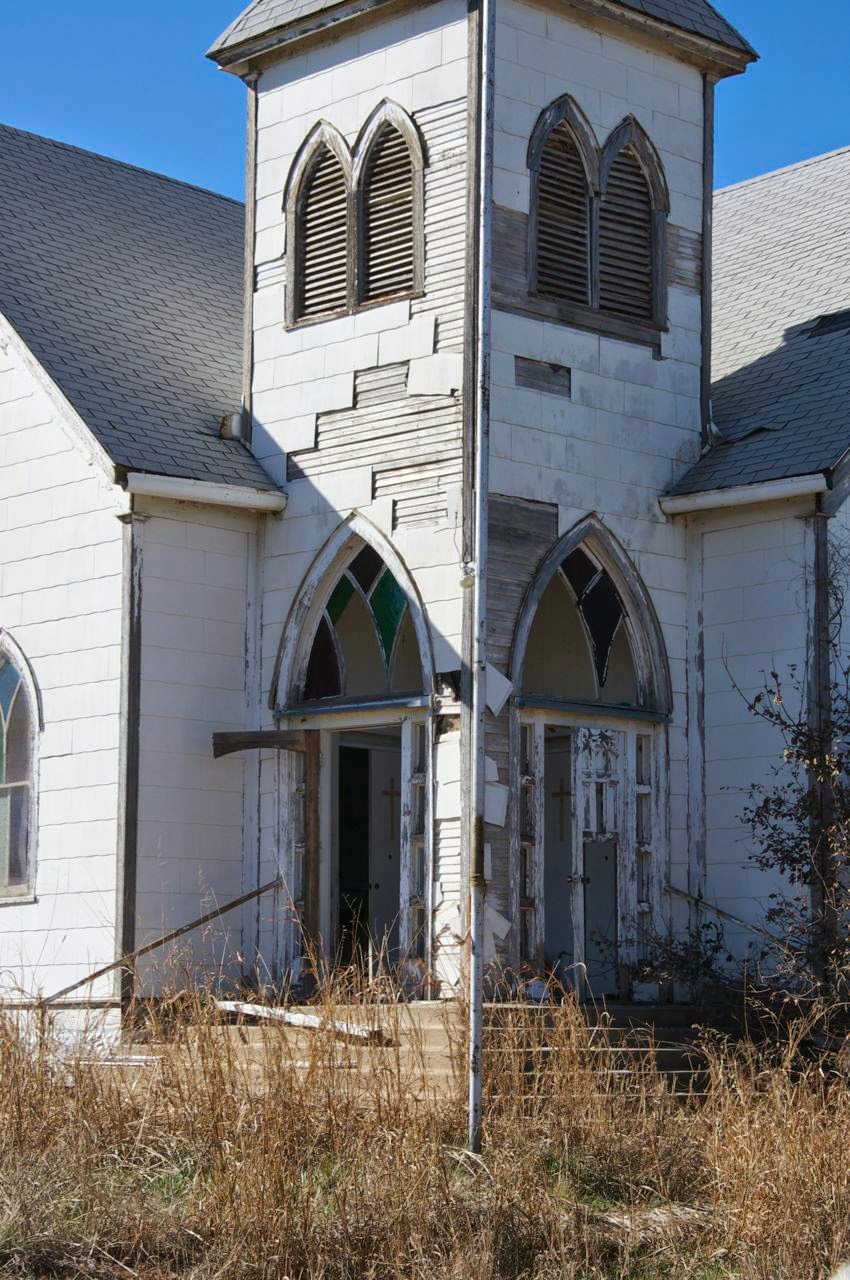 The church still held worship services as late as 1974, and held a monthly music "jamboree"--a family music event common in the region (Olney Enterprise, August 29, 1974, p. 3).  I don't recall attending one in Jermyn, although I remember going to them at other area locations, including the Newcastle High School auditorium, the Fort Belknap community building, and the Stovall Hot Wells outdoor pavilion. 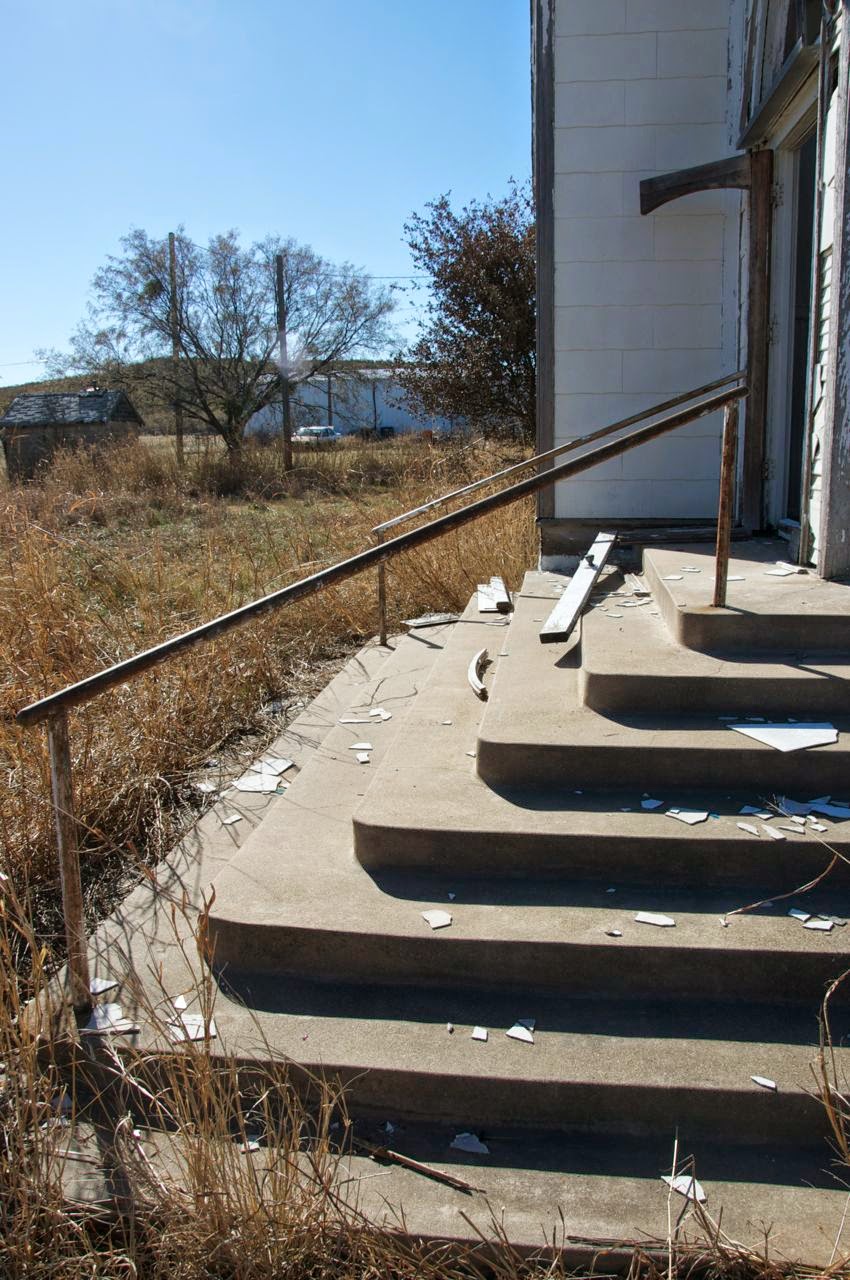 The Gothic Revival style was popular in the late 1800s in the US, and due to plentiful lumber resources in most areas, and the lack of money for masonry construction, wood framed churches, called Carpenter Gothic, were frequently erected.  I located two churches in an identical style to the Jermyn church in other areas of the US.  The style remained popular for churches until the 1940s. 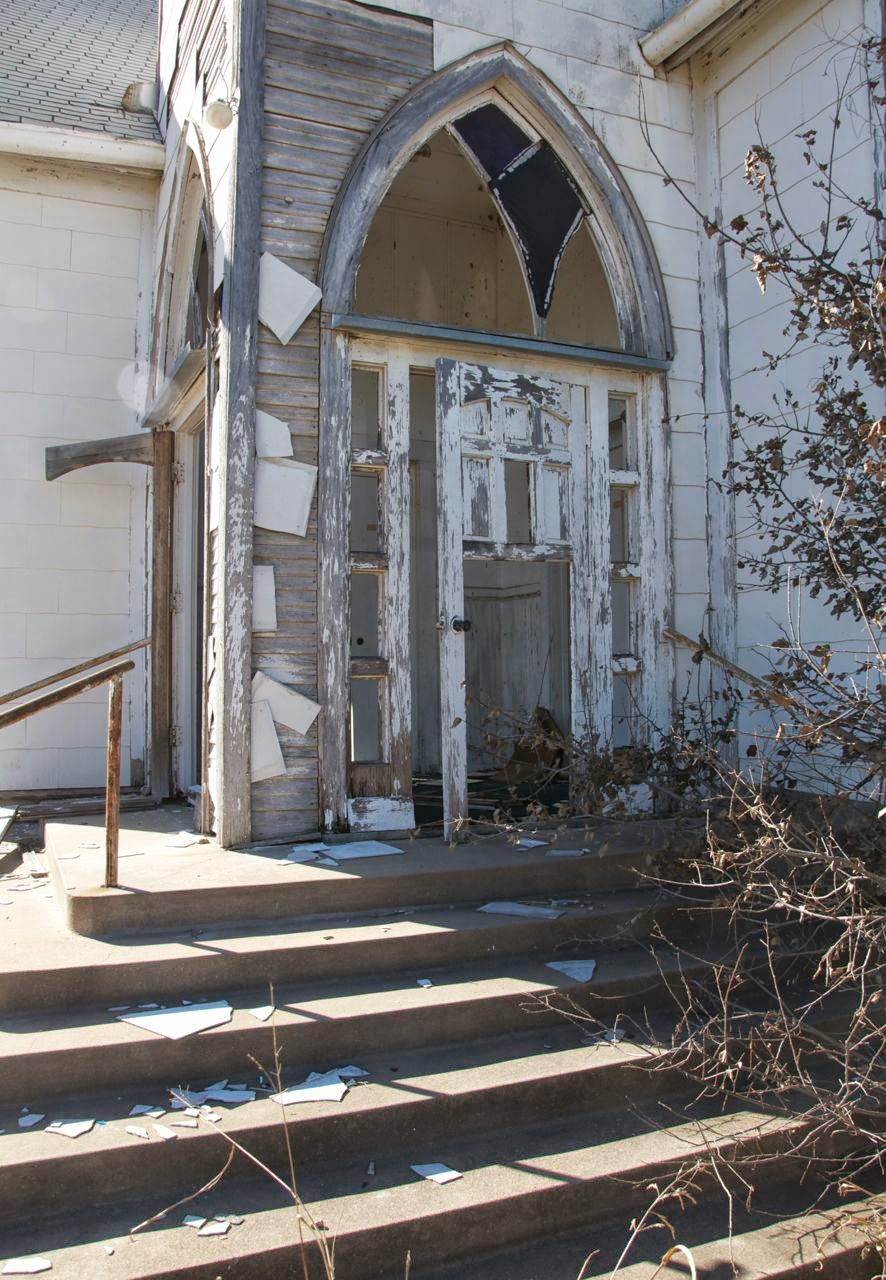 Common characteristics include board and batten siding, pointed arched windows, and towers.  In the case of the Jermyn church, the tower serves the purpose of the entrance vestibule and to house the bell.  Pointed arches adorn the stained glass windows.  Clapboard is under the asbestos shingles in this building.  Asbestos-cement shingles for siding were introduced in 1907, as a fire-resistant construction material, but the textured surface of the siding on the Jermyn example were not introduced until last 1930s.  Up until then, they were smooth.  The wavy bottom edge was available beginning in 1937. (Wilson, R. February 2008. Early 20th-century building materials: Siding and roofing. Facilities Tech Tips. United States Department of Agriculture Forest Service., p. 4-5.) 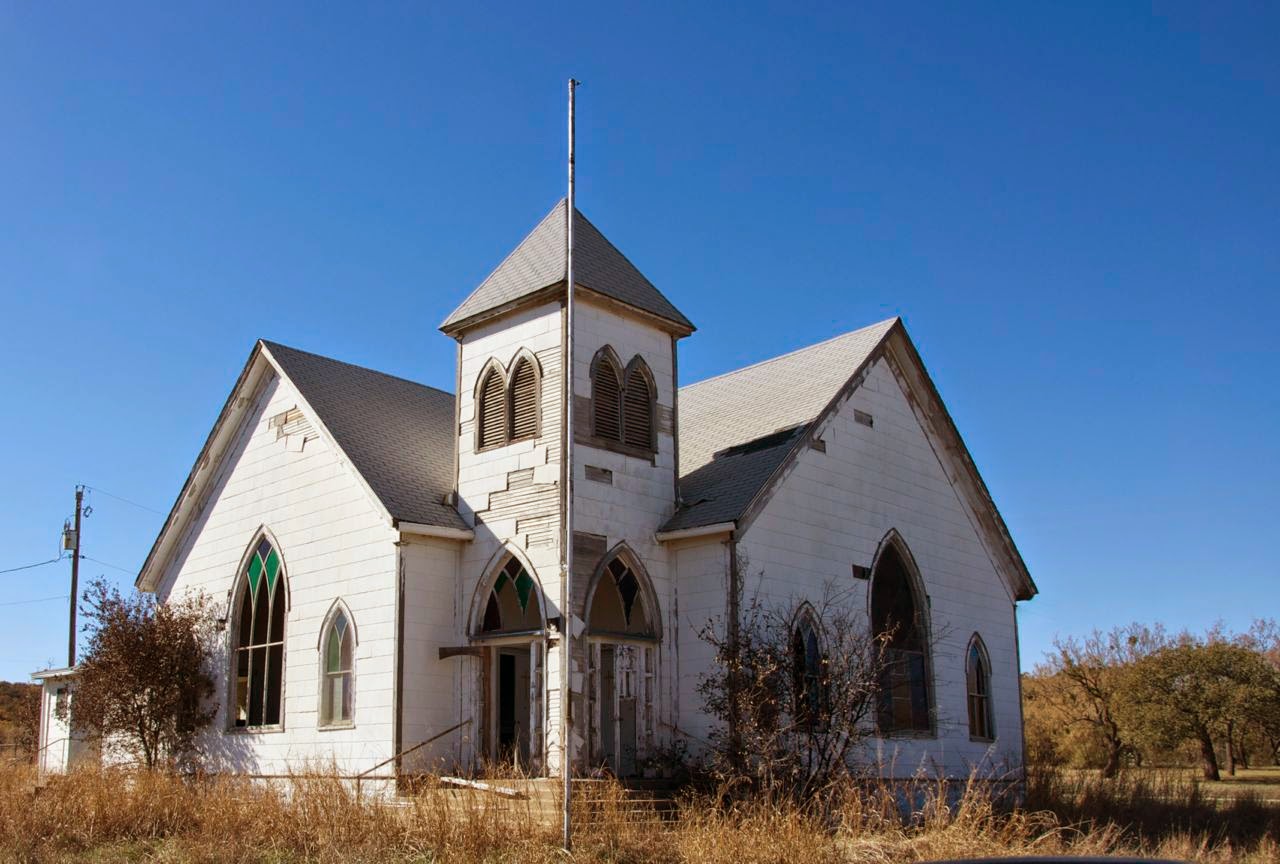 Tomorrow, I'll step inside, which provides an entirely different perspective of this rural Texas church. 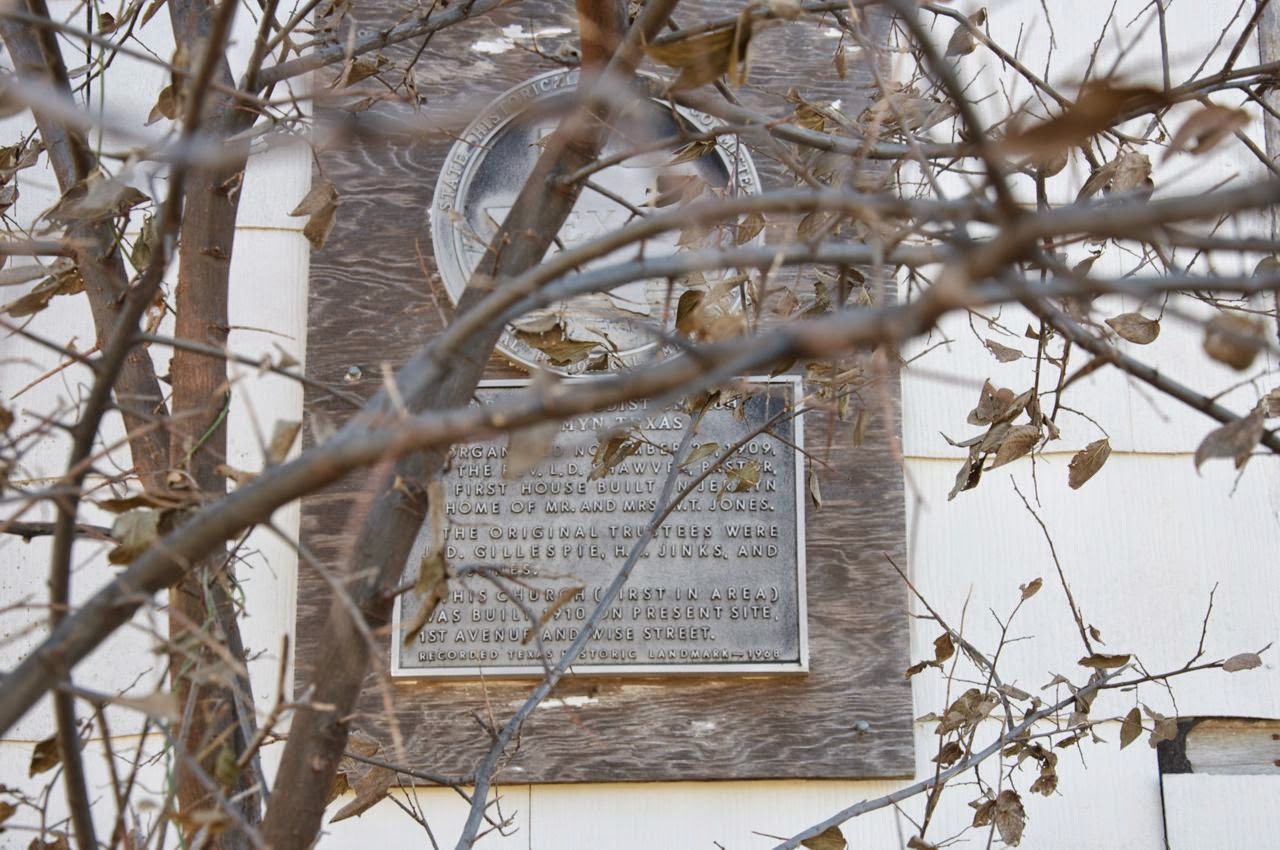 OH! I love this. Can't wait to see inside.

Have to build a little suspenseful tension! :)

This lovely building looks so sad and forlorn, like it is waiting for someone to love it again. I remember my dad (raised in Lafayette County) talking about going to "Sunday Singings" which must be the same thing as the "jamboree". I can't wait to see the inside.

Most of the time, the Sunday Singing and the Jamboree was the same thing, with a lot of religious songs, but also some old-time country songs were added in many places--at least the ones I went to.

I actually had a bit of trepidation about the decision to go inside, both because of the two large dogs that came up when I first stopped, but also because one never knows what will be inside. Needless to say, I overcame the fear.