Possum in the trash can 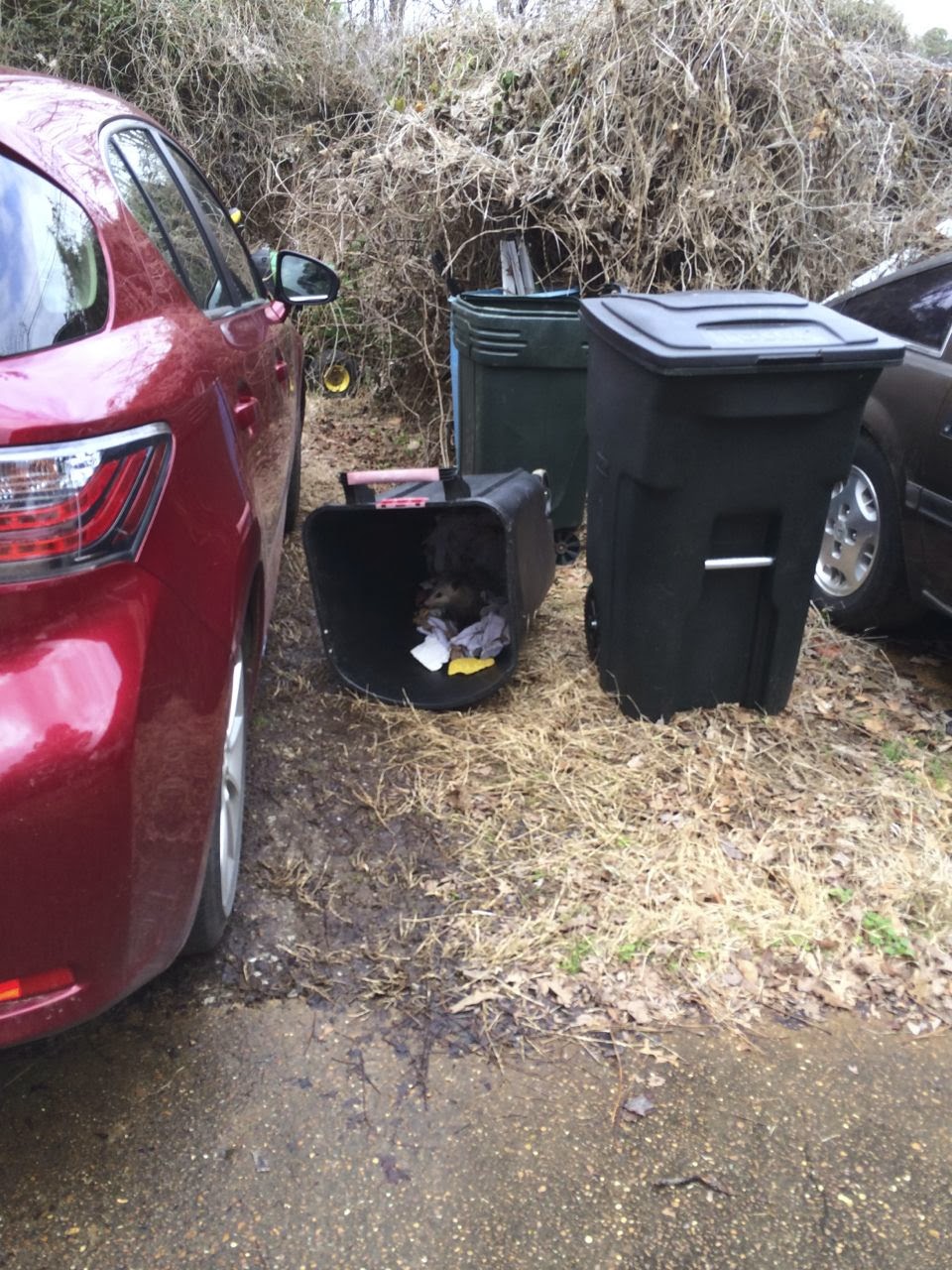 You might think it has been a slow news week here in Lottabusha County, what with the headline story today being a possum in a trash can.  Frankly, nothing could be further from the truth, but it is just the most benign news story around these parts this week.  Right now in Lottabusha, benign is a rare thing, so when it happens, I have to leap on it.

Three of my colleagues and I are hip deep in a rapid revision of an article for potential publication, with a short turnaround time before my hip surgery Monday.  In the midst of this critically important work for the four of us, it has been, shall we say euphemistically, a difficult week emotionally in terms of disturbing things happening.  Some of those disturbing things are public and in the news, so if you at all keep up with ignorance, bias, and the inane behavior and comments of people who are reluctant or hostile to moving into an era of civility, let alone equality, you already know what I am talking about.

I went out yesterday morning to put out a bag of trash and just as I was about to drop it in the bin, a wad of fur caught my eye.  J had obviously cleaned out his old sock drawer and there was a pile of socks in the bin…with a ball of fur on top of it.  It appeared to be a ball of dead fur…and I am wondering how a dead possum got in the trash bin, when I noticed it was not dead, but curled up, sleeping.

Not being one to want a critter to suffer a horrible death from dehydration or starvation or having bags of trash dropped on its unsuspecting head, I turned the bin on its side so the possum would be able to get out.  Now, honestly, I am annoyed with the possums and raccoons who wreak havoc in my yard, eating the cat food, dragging the bird feeders out of the tree--no matter how securely I think I have attached them--and dragging the trash out of the bin ad infinitum (and yes, lids would work, but about 2 weeks with the trash crew and lids that are attached to the bins are no longer attached, and/or have been tossed into the drainage ditch and/or backed over by the trash truck on turnaround, but that is another saga of life here in Lottabusha County).

So, said annoyance and desire that possums not occupy my personal space does not translate into leaving it at the bottom of a trash bin to die.  A possum is a nocturnal critter, and this one appeared to be quite young.  It opened its eyes, staring rather blindly around in confusion.  I retreated into the house, but came out in a bit to check--nope still in there, albeit burrowed under the socks.  At 5:30, it was still burrowed under the socks, waiting for dark.  This morning, there is a little round imprint in the pile of socks where it had slept all day, the only reminder of my little unwelcome visitor.

Posted by Suzassippi at 9:19 AM