Now today was just one of those days that you know is an important day, and that you were just so fortunate to have.  My dearest friend and I had to go to Jackson today on some work-related business.  Since I will be making this same run tomorrow...and continuing on for another 9 hours to Texas, she said she would drive.  Somewhere along the way, she mentioned she wanted to eat lunch at the Big Apple Inn--a place she had just heard about.  Delta Blues called it "the home of the world's most unusual sandwich."  That would be sandwiches made with a pig's ear, and Big Apple Inn is located on Farish Street, just off of downtown Jackson.  Farish Street was a bustling busy commercial and residential district during the 30s, and for some while afterwards, and home to African Americans in the segregated south.  It is still predominantly a black neighborhood. 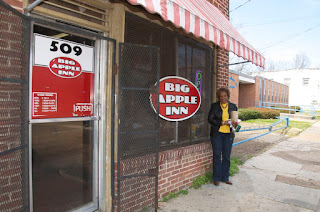 The Big Apple Inn opened in the 30s when the Lee family patriarch (based on the documentary video running on the TV on the counter, and the Delta Blues article) started the business.  Juan "Big John" Mora, a Mexican immigrant, had established a tamale business and sold his store to Mr. Lee in the 30s, and according to the documentary, he moved into the current building in 1939 at a time when business in the area was booming from folks getting off the train only a few blocks away.

A local butcher, according to Gene Lee, Jr. in the video, asked the elder Mr. Lee if they could use some left-over pig's ears.  Fast forward--it is the depression, after all--and they cook the pig ears all kinds of ways figuring out how to make them tasty enough to sell.  Back then, it was boil them for 2 days; now, a pressure cooker does the job in a couple of hours.  First, a pig's ear sandwich was 10 cents; in 1998, 75 cents, and today, 2013, it was $1.25.  Pig ears are far more expensive today, because they are used for dog chews--big money--so it costs more for a box of pig ears.

So, what does a pig's ear sandwich taste like?  According to Delta Blues, "...a texture like juicy bologna, a cross between ham and roast beef."  According to my friend, "...delicious, tender."  And me?  I had the "Smokes"--the sandwich made by grinding up red casing hot links, cooking it on a grill, and slapping it on a bun dressed with cole slaw and mustard.  They took one look at me and knew I was a huera and an out-of-towner--"mild for you?"  I regret not being brave enough to at least taste the pig's ear sandwich...I just have such vivid memories of my former father-in-law eating boiled pig's ears and talking about "fat and gristle" and neither of those are things I really much care for.  Apparently, Big Apple Inn pig's ears are a bit different...and I have vowed to try them on my next trip to Jackson.   After all, I did grow up eating fried bologna sandwiches, and fried bologna as breakfast meat.

The MDAH Historic Resources Inventory database lists the building as circa 1949 (estimated) although the video and Delta Blues claim 1939 for moving into the building.  Both the documentary (on which Charles Evers appears) and MDAH identify it as the first NAACP field office in Jackson, established upstairs by Medgar Evers in 1955.

And the Big Apple?  Seems the Big Apple dance was very popular during the time the business was established by Mr. Lee.  Created by African Americans in 1937 in Columbia, South Carolina, in a club called Big Apple, the joyous circle dance was popularized across a nation eager to move beyond the Depression.  Mr. Lee thought that was a good name for the business, and since they are still there some 75 years later, he must have been right.  And, there is that whole thing about people loving the pig's ear sandwiches, the 'Smokes; and the tamales.
Posted by Suzassippi at 8:26 PM