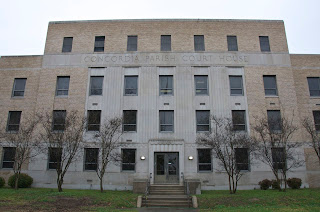 In 1939, the entire town of Vidalia, Louisiana was relocated (www.crt.state.la.us/hp/nationalregister/nhl/parish15/scans/15012001.pdf).  The courthouse was demolished, and this "restrained example of the Art Deco style" erected.  The four-story brick and stone building was designed by architect J. W. Smith & Associates, and built by M. T. Reed Construction Company.  While private contractors (and non-federal funds) built the courthouse, WPA workmen were involved in laying out the site, due to the relocation of the town. 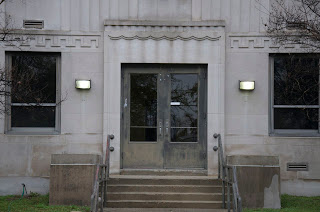 A Greek Key design runs around the building in the belt course, delineating the first and second story. Fluted pilasters of stone separate the bays. 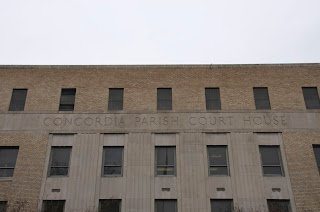 The jail was housed on the fourth floor, and even though it is no longer there, and there is a new modern (wasn't Art Deco modern in 1939?) courthouse--a spiffy glass, steel, and concrete design that I yearned to capture, but the rain was not cooperative that day), the bars remain in the windows.

You might wonder what occasioned the relocation of an entire town, particularly in 1939.  Vidalia's location on the Mississippi River is a major clue--in fact, it's the only clue.  Following the Great Flood of 1927, the Corps of Engineers (apparently, it took them over 10 years to determine this and take action, a feat not unlike their delay in assessing the danger of levees in New Orleans pre-Katrina and then failing to take action until after Katrina) determined that flood control necessitates more than levees, and proposed straightening the bend in the Mississippi at Giles Point north of Vidalia.  Natchez sits on top of the bluff opposite Vidalia, so the town sacrificed in the federal flood control project was Vidalia. Washington pressure was brought to bear to relocate the town inland, however, and WPA funds were allocated to--literally--move the town.

Workers laid out new streets and sidewalks six blocks inland, and jacked up and moved, on rollers, over 100 homes and commercial buildings.  The remainder of the homes and businesses were demolished and rebuilt on the new plats.