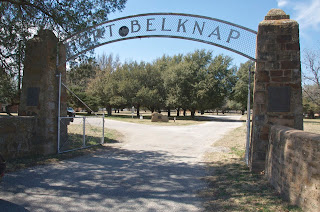 It was a beautiful sunny and pleasant day here in Texas, and I asked Dad to ride out to Belknap and Murray with me while I was working on my photographs for the Living New Deal project.  I had recently discovered that the PWA reconstructed the Fort Belknap (a frontier fort in the 1800s) in 1936 as part of the New Deal work across the US.

The architects of the reconstruction were Voelcker & Dixon, a firm out of Wichita Falls who constructed courthouses throughout the region.  The photograph above is of the old mule barn, which housed a clothing museum the last time I was in it.  There were showcases lining each side of the wall, and included clothing from the period as well as latter years, including a gown worn by LadyBird Johnson.  It was one of my favorite places when I would visit the fort as a child. 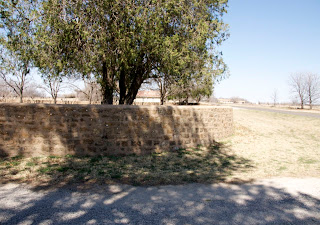 Dad said the rock fence surrounding the fort was a result of the PWA construction.  As a child, I could never quite figure out how that little short wall could have protected the fort from the Comanche in the area.

Afterwards, we drove on over to Murray, a small community near where my dad grew up.  The school was built with PWA funds and workers.  My grandfather was hired to drive the workers over in his Model A truck.  The school building stood for many years, albeit without my knowing its history, and the last trip home, I noted it had finally been demolished, or finished falling down.  Nothing remains except the foundation stones. 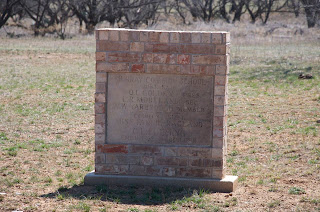 The cornerstone was saved and marks the area.  One would not know that this was a PWA project, like many of them that will pass unidentified unless we work diligently to document them--the mission of the Living New Deal.
Posted by Suzassippi at 7:38 PM