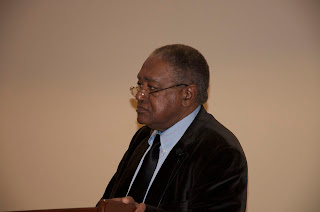 This man could pass for a preacher, or someone's grandfather. Seeing him now, most people would not think they were looking at the "radical" who co-founded the Black Panther Party in the 60s. When I walked into the ballroom at the Inn of Ole Miss tonight at 6 p.m., had I not just looked at his website minutes before, I would not have known him either.
I sat down next to the daughter of my friend and colleague, who was meeting me for the lecture. "Is your mother still coming?" I asked. Yes, she was looking for a parking place. While we waited, Jonlyn asked, "So can I ask you a question?" Jonlyn and her mother are African American. She continued, "Knowing you were living through this when it was happening, what did you think then, and what do you think about this now?"
I shared my story: When I first heard of the Black Panthers I was in high school. Like most whites, I was afraid of them. We were told they would kill us all, and that we were in danger from them. I would know nothing different about them until I began my graduate work on my PhD in 1994. In one of my classes, I had to do some research that led me to one of Manning Marable's books. Marable talked about the inner city programs established by the Black Panther Party--including free breakfast programs, tutoring programs, and community and neighborhood organizing for fair housing, protection from police brutality, and others. It was a story I had never heard, never read, never been told. Curious, I began to do further research about the Black Panther Party and discovered "Gun Barrel Politics" which was a congressional report of the investigation into BPP issues. From the congressional inquiry of our own government, I would learn that the FBI had created a counterintelligence program called Cointelpro, and broken laws and violated civil and legal rights in so doing. It concluded the FBI was in error. That led to more research on my part. How could this be? Didn't the FBI kill "those people" because they were a danger to us?
I read The Cointelpro Papers and was once again astonished. To summarize a long, sordid program in a few words, the FBI used the media to convince the public that the BPP were a danger in order for us to accept and condone their murders at the hands of the FBI, whilst they were "protecting" us from these criminals. Nothing could have been further from the truth.
Fast forward to 2009, and a 72 year old Bobby Seale is at the University of Mississippi in a still racist South talking about co-founding the Black Panther Party and his opinion of whether the grassroots organizing style of the 60s is still relevant in today's world. 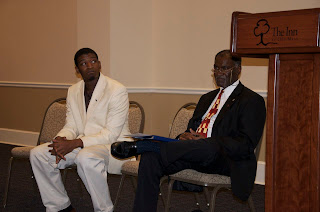 Mr. Seale was welcomed by Dr. Donald Cole, pictured in the black suit. Dr. Cole, now an assistant vice-president at the university, was a rebel back in the day as well. Dr. Cole was expelled from the university for his organizing for civil rights. Now he is among its top administration--and still a bit of a rebel as far as I can discern. Robert Reece, the young man in the light suit, is president of the UM NAACP and a senior sociology major. Apparently, his efforts to bring Mr. Seale to campus were the brain and muscle behind this happening, though many worked to bring it about. 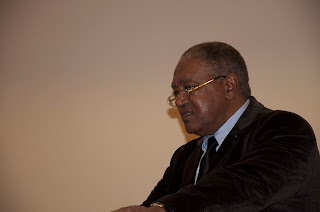 As Mr. Seale began, he said that there were only 2 states in the Union to which he had not been invited nor spoken: Hawaii and Alaska. He added, until 3 days ago, it had been Mississippi, Alaska, and Hawaii. He must have recognized the significance of being invited not only to Mississippi, but to the University of Mississippi.
Mr. Seale is a dynamic and fascinating speaker. Part preacher, part comic, part historian, part radical, part organizer, he was entertaining, poignant, inspiring, and empowering. He shared his early life experiences that led him to despise bullies and desire equality and fair treatment, from the childhood bully to whom he stood up to his days in the Air Force until discharged for standing up to racism, his education and introduction into the African history that was a part of his history he had not known about, and how that led to his political community organizing. He shared his rage and sadness at the loss of John F. Kennedy, Malcolm X, and Dr. Martin Luther King. After the death of King, he contacted a colleague--Huey Newton--and said they had to form a new organization. The 10 point platform of the Black Panther Party was the result.
That was not the only thing Mr. Seale did in his life. He had been working in the community for the government, in community programs for inner city youth. He has continued to do that post-BPP. What he did tonight was to help young people understand a little more about the African roots of their own history, and to understand the context in which he and the other members of the BPP organized--in self-defense. 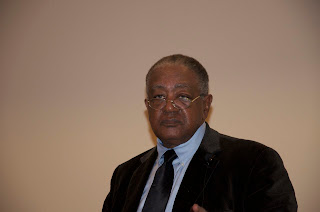 When he ended, Mr. Seale reiterated that the style of organizing of the 60s is not needed today. Technology is the gun barrel of today; he does not advocate for guns, nor see them as appropriate. The video camera, the cell phone, the technology of the Internet is what promotes organizing and education and self-defense today. He is still a devout believer in the importance and necessity of political and community organizing at the grass roots level. In closing, he said that the human genome project indicated there is less than 1% difference among us as to our biological make up. Hair color, eyes, skin color are all the tiny little surface.
But our humanity is what holds the key to bring us together and to change our world into one of fairness. My friend and colleague reached for my hand and I turned to her to see tears in her eyes.
Posted by Suzassippi at 8:42 PM

Wish I could have seen and heard him! I remember researching all the Cointelpro information at the UTA library and how shocking it was, even though by then we knew what the government was capable of doing. Fred Hampton murdered in his bed and all the other cover ups and lies put forward to discredit the Party and the good they were doing in communities. People didn't want to know the truth. Probably still don't! Thanks for posting. I hope one day to live in a place where I can attend lots of interesting events like this one! Even if he makes it to Alaska, I doubt it will be the Aleutians. :)

There was an article today in the paper and me, Debra, and Jonlyn are pictured with him...of course, it is just the back of our heads, but I can say I had my picture made with Bobby Seale. :) There is also a great You Tube interview by the University, which I will post, though you probably can't get it. It is only 2 1/2 minutes, so maybe it will load for you.